'Frustrating' repeated vandalism at Laois park escalating into a 'nightmare' 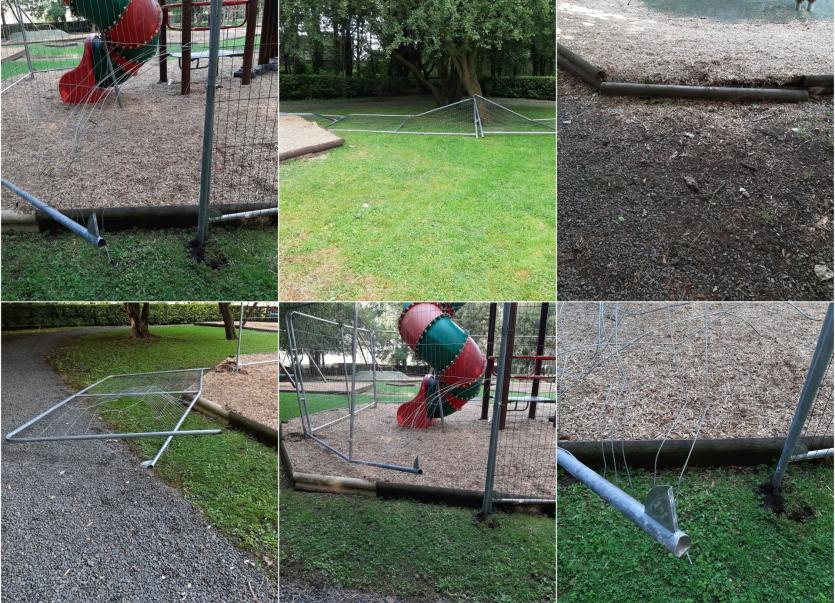 Pictures of some of the damage at Mountrath park

‘Frustrating’ and repetitive vandalism at a popular Laois park has worsened during the summer months and people are being asked to report any incidents in the park to gardaí.

Vandalism including damage to equipment and cutting through fences started at the beginning of the school summer holidays this year and has now escalated to almost every night in Mountrath park and amenity area.

Brenda O’Grady is the Chairperson of the Mountrath Development Association. She said the constant damage at the park has escalated into a ‘nightmare’.

“Three weeks ago the slide was broken and damaged. It had to be fenced off with builders fencing and then it was closed off because we had to order in a part from Germany.

“The slide has been broken, boards around the zip line have been removed, a steak which was concreted into the ground has been removed and thrown into the river and wire cutters have been used to cut through fencing.

“The vandals came back and they had actually cut through the wire of the fence with bolt cutters and broke the second section of the slide.

“All around the activities, there are wooden stakes that hold bark to make it soft for children to play on and they have kicked that away into the river, this is happening every night.

“All our resources are going into the health and safety and repairs, it’s a nightmare. We have reported everything to gardaí, it is a huge waste of resources. If people see gangs we are asking them to call the gardai and follow up with it or call us to report it.

“Crime stats in Mountrath aren’t showing up on the guard’s system because these things are not being reported and followed up on so they are not registering.

“The people doing this are aged between 14 and 17 in gangs. This has only happened since the start of the summer holidays, that week of the exams, it’s at the stage now that the gangs are there in the afternoon.

“Parents using the park in the afternoon need to be vigilant and let the guards know if there is any trouble or anyone interfering with the children playing. There are a lot of visitors in the town and people come to the park because it is one of the better ones in the county and it has the river beside it.

“It is extremely frustrating, we are putting a lot of work into the maintenance. The financial burden is hindering further development because funds that should be used for new projects are going into repairs. We need more garda patrols particularly between 7 pm and 10 pm. I think it will just continue,” she said.