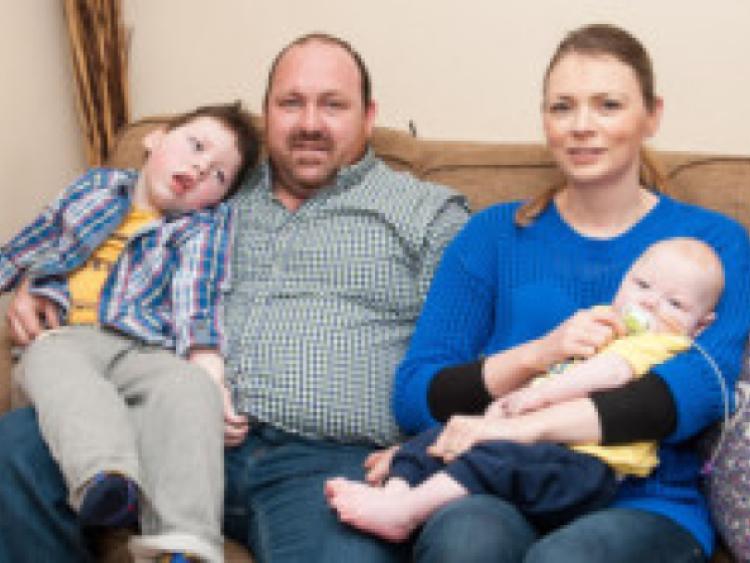 The parents of two disabled boys in Mountmellick have launched an appeal for help.

The parents of two disabled boys in Mountmellick have launched an appeal for help.

Nicolette, daughter of painter Con Farrell, and her husband Terence Connolly from Portarlington, are struggling to care for Ben aged 5 and Jake, 7 months.

The brothers have a rare genetic condition, Allan Herndon Dudley Syndrome, that only affects boys, with just 200 cases worldwide. They are the only Irish cases. They lack a cell that lets the thyroid hormone reach the brain. This causes severe brain damage, progressive spastic quadriplegia and seizures. Most do not live past their teens. There is no treatment or cure, only drugs to control the seizures.

Ben aged 5 has a mental age of less than a year. He cannot support his head and is fed through a PEG tube.

Speaking in their sitting room, while Ben slept in his hospital bed, Nicolette explained his routine.

“Ben wakes every morning at 5. It takes two and a half hours to medicate, wash, dress him andhook him to his feed. Because of the sheer volume of medicine, we have to wait half an hour between two batches. He sleeps from 11 to 3.30, then from 10 tonight. If he doesn’t get his sleep, it’s seizures. Every time he ends up in hospital it’s three months trekking up and down to Temple Street,” she said.

Despite his illness, Ben’s character shines through.

“He is a happy, smiling little chap, he loves attention, and people talking to him, he tries to communicate with us, making sounds, if we leave the room, he calls louder and louder for us,” said Nicolette.

There was a 25 percent chance that if they had another child, it would have AHDS.

“That was a severe hit, it knocked us for six bigtime,” said Terence, who stopped work after Jake arrived.

The boys need professional nursing care, so there is only so much help family can give.The couple eke out the hours of nursing help they get during the week, coping on their own at nights and weekends.

They sleep in one bedroom to keep watch on the boys.

In the kitchen, Jake is being cuddled by a nurse as he takes his nasal feed. He also has a cold, and has just vomited, a regular event for both.

“He has cerebral irritation, it makes him very cross. It’s like an itch on the brain. Ben grew out of it,” says Nicolette.

The HSE allocate them 30 nursing hours a week. The Jack and Jill foundation give eight more, but this will stop when Jake turns four.

“We’re fed up fighting for nursing hours. OT is a big headache too, waiting on equipment. The HSE should be there to make things easier, but we have to fight for everything, then they get cross, and we wonder are we asking for too much,” said Terence.

“Jake goes to the Laura Lynn centre for two nights a month, then we get a breather,” says Nicolette.

They live in a small two storey home on Connolly Street, extended before the boys were born. They are falling behind on the mortgage, but need to move urgently. Recently Terence stumbled when carrying Ben downstairs.

“Luckily I caught the bannister. We need to get out of this house. The dream is a bungalow where the boys have full access, hoists, a wet room and space for their beds and chairs. A sensory room would be great and a garden,” he said.

The couple have decided against more children.

“We couldn’t go through the risk again, said Terence, adding that their troubles has made their marriage stronger.

“It is by no means easy, but it has made us better people, it opened our minds to the world,” agreed Nicolette.

They are setting up a trust fund, and already people are arranging fundraisers like the mini marathon and a family ‘Night at the Dogs’, on June 14.

“One girl even wants to give us donations as her wedding favours, ” said Nicolette.