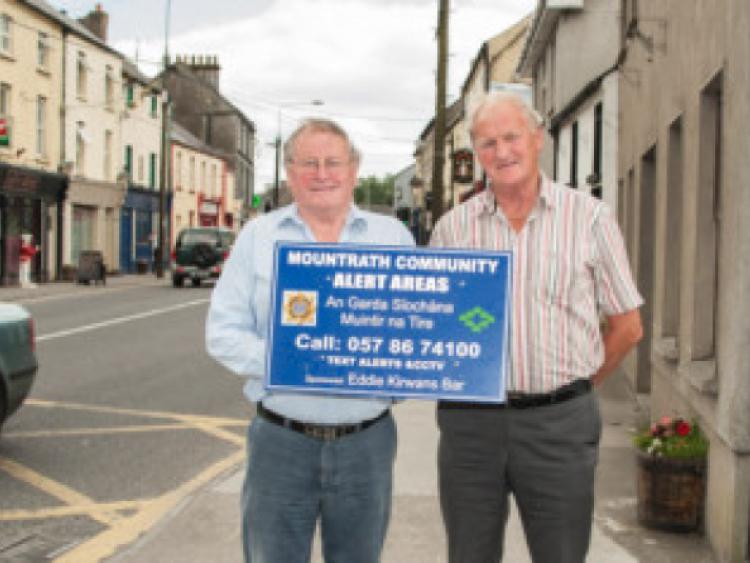 A community alert group has got underway in Mountrath and is going from strength to strength .

A community alert group has got underway in Mountrath and is going from strength to strength .

Secretary of the newly formed Mountrath Community Alert (MCA) John Delahunty says he suggested forming the group partly because “people were feeling nervous. There were spates of robberies coming up to Christmas,” he said.

Community Alert schemes are taking off all over the country says Mr Delahunty.

“They help a community to become aware of what is happening around them, and help older people who may be vulnerable,” he said.

MCA was formed last October and is going from strength to strength, with over 200 people signed up and receiving Garda text alerts on crime threats in their area.

The group have erected signs with the phone number of Portlaoise Garda Station, 8874100, and people are urged to ring about anything suspicious, such as people hanging around properties or bogus house callers. Gardaí then send out group texts to warn everyone else.

“After the bypass opened, Woodenbridge experienced seven to 10 robberies a week, but since they set up their community alert, there has been one attempted robbery in five months.

“A local man had a caller coming to his door offering to sell him stolen property. “When he told him the text alert scheme would be reporting him, he got into his car and went,” he said.

The scheme has just reopened for further applications, with a target of 350 homes across the Mountrath parish, taking in surrounding areas such as Drim, Deerpark and Paddock.

They are now also part of the Senior Alerts Scheme, and are inviting over 65’s living alone to apply for a panic button.

“If you feel vulnerable or are living in fear, get in touch with us.

“We ask people to be aware of what is happening in your community, keep an eye on senior citizens particularly those living in isolation,” he said.

The group are registered with Muintir na Tíre.

Text alert applications, with a €10 fee, will be accepted until Sunday July 6.

Forms are available from the committee.