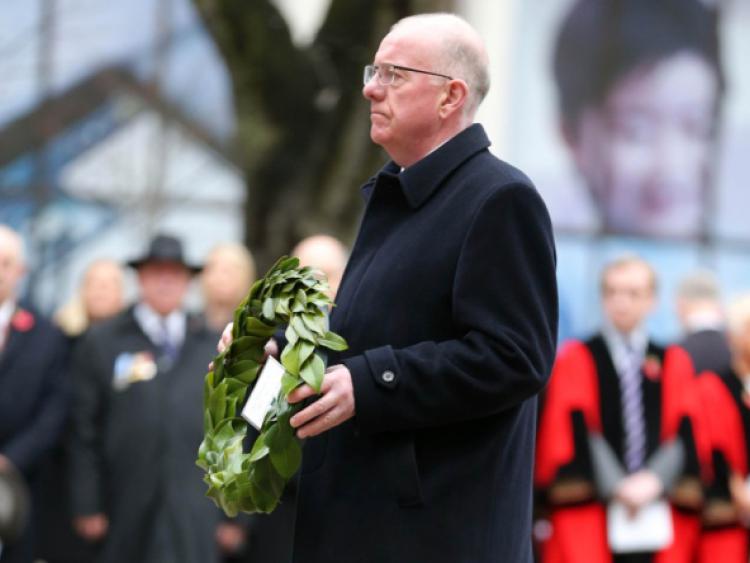 PADDY Green’s two grandfathers and his father served in the First World War--and he proudly wore their medals at the annual remembrance ceremony at the Leinster Regiment Fourth Battalion Memorial in Millview, Portlaoise, last Sunday.

PADDY Green’s two grandfathers and his father served in the First World War--and he proudly wore their medals at the annual remembrance ceremony at the Leinster Regiment Fourth Battalion Memorial in Millview, Portlaoise, last Sunday.

To him went the honour of laying a wreath at the monument. One of his grandfathers, Tom Green, and his son, also named Tom, survived the war. Paddy’s maternal grandfather, Terence Redmond, did not. His name is on the Menin Gate at Ypres in Belgium.

Originally from Lyster’s Lane, the Greens, of course, are a well known Portlaoise family. Paddy now resides in England. With him on Sunday were his wife Lima and old friend Johnny O’Brien.

Mary Sanders travelled all the way from Wexford to lay a wreath in honour of her uncle, Sergt Patrick Hackett, whose name is inscribed on the Memorial. She is a Dubliner.

Displayed at the ceremony was a specially-erected plaque to mark the 100th anniversary of the outbreak of The Great War, 1914-1918,

Readings were done by Charles Mott of Post 27 and Garda Jerry Dillon. He, too, served with the United Nations.

County Council Chairman John Joe Fennelly said it was a privilege for him to welcome everyone to the ceremony, especially as this year marked 100th anniversary of the start of the First World War.

The armistice that ended the war, he noted, came into effect on the eleventh hour of the eleventh day of the eleventh month--11am on November 11, 1918. He added: “We should also remember here today all our men and women who are currently serving their country overseas.”

* Kathleen O’Brien thanked Michael Coyle for carrying out improvement work on the Memorial. She said Foreign Affairs Minister Charles Flanagan, who usually delivered the oration at the ceremony, was laying a wreath in Belfast.