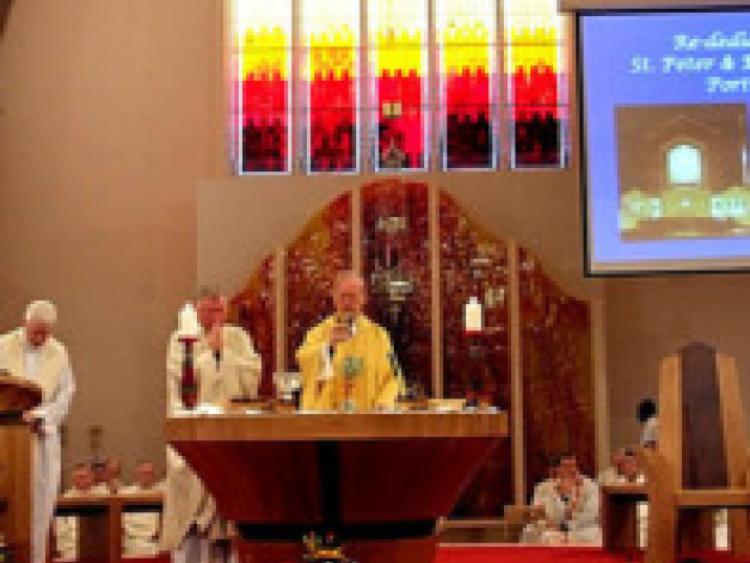 Portlaoise Parish have commissioned some work to enhance the Church in association with the Golden Jubilee.

Portlaoise Parish have commissioned some work to enhance the Church in association with the Golden Jubilee.

Artist Anne Murphy of Eala Enamels will work on the Altar, Ambo, Chair and Cross, givng them visual unity and enhancing their presence in the sanctuary.

Glass artist, Eoin Turner, who worked on the Reredos in the Church in 2008 has been asked to provide a safe for the Sacred Oils, called an Aumbrey.

“In association with the Golden Jubilee year, we have commissioned some work to be done on the sanctuary and Aumbrey. We have seen sketches of the work and they will pick up the colours in the sanctuary. I think it will look very well,” Monsignor John Byrne explained.

The piece will be assembled as a piece of furniture and brought to the SS Peter and Paul’s Church where it will be placed in time for the Jubilee Weekend, the first weekend of July.

Msgr Byrne doens’t have a final figure for the cost of the work that has been commissioned.

“We haven’t a figure for the work yet, but we are well supported and we won’t have to do any fundraising for it.”

The Golden Jubilee will be celebrated over the first weekend of July.

“Once the Novena is over, we will be concentrating on organising events around the Jubilee,” Msgr Byrne said.

The Monsignor said this year’s Novena was ‘exceptionally well attended’ with upto 4,000 people passing through the Church each day.

“Running the Novena over nine days took the focus off the guest speaker and put it back on to the ceremony. Which was good. All the masses were well attended, even the ones at stranger times such as 7am or Midnight mass.”