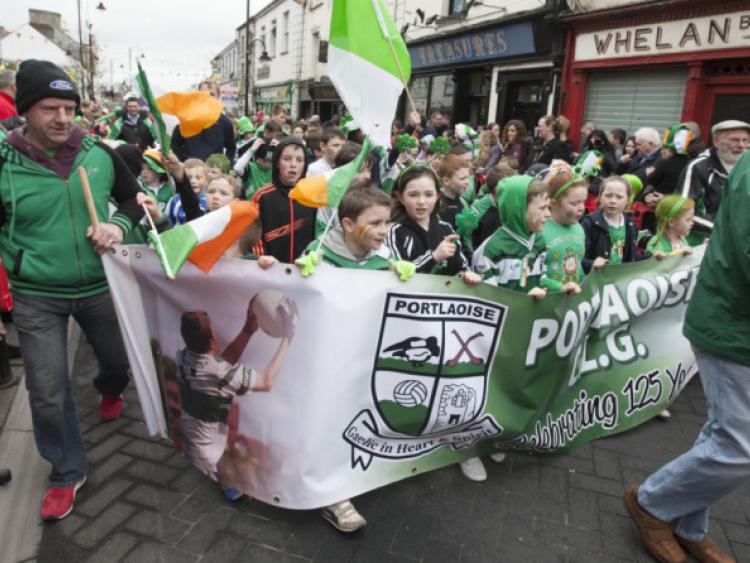 It’s that time of year when we take to the streets in every town and village wearing every stitch of green in our wardrobe to honour one of our patron saints, St Patrick.

It’s that time of year when we take to the streets in every town and village wearing every stitch of green in our wardrobe to honour one of our patron saints, St Patrick.

As usual, there is a great selection of entertainment and parades around the county on the day.

Starting with Portlaoise, where the St Patrick’s Day Parade will get underway from County Hall at 12.30pm, directly after the Streets of Portlaoise roadrace.

The parade will go down James Fintan Lalor Avenue to the Church, back up Main Street to the viewing stand in the Top Square.

There will be entertainment in the Top Square, Lower Square and the junction at the Courthouse before and after the parade.

“We’ve a big entry again this year, but we are appealing to the hospitality industry in particular to get involved either through sponsorhip or entering a float in the parade,” PRO Ger Whelan said.

“People were happy with the shorter route last year, so we’ve decided to stick with it again this year.

The committee, who are still looking for volunteers and stewards, will hold their final meeeting tomorrow night (Wednesday) at 6.15pm in De Brún’s.

The Streets of Portlaoise 5K Road Race returns again before the parade at 11.30am. Entry €15 with top cash prizes on offer for all race categories. Registration is now open on-line with Run-Ireland or on race day in the Portlaoise Heritage Hotel from 9am. This year’s chosen charity is the Kolbe Special School Playground in Portlaoise. Check Portlaoise Athletic Club Website or Facebook.

The rejuevanted Portarlington parade commitee are hoping they get some unusual floats with their kids theme this year.

The parade will leave from Station Road at 3.30pm down to the Square and finish up at Super Valu.

“We’re delighted the parade is going ahead this year and we’re just hoping the people will get out and support it,” Niall Coffey said.

There will be musical entertainment, a bouncy castle and face painting for the kids.

Meanwhile, the theme for the parade in Mountmellick this year is ‘small town, big heart.”

The parade will assemble at Turley’s at 1.30pm before kick off at 2pm.

There will be live music in the Square following the parade.

“We’ve decided not to have the craft fair this year, but we hope to have some entertainment in the square afterwards, we’re just finalising everything at the minute,” Gerry Mulvaney explained.

“We’ve had a good parade the last few year’s and we hope to continue that this year. We’re still waiting on confirmation from some groups, but we’re always well supported by local businesses, the GAA and all the different clubs and organisations in the area.”

In Abbeyleix the parade will take place at 12.30pm.

The committee have asked people to get their thinking caps on with entries being judged under 3 categories- best window, best float, best walking group.

The organisers would also welcome anyone who can help out with the setup the weekend before or on the day.