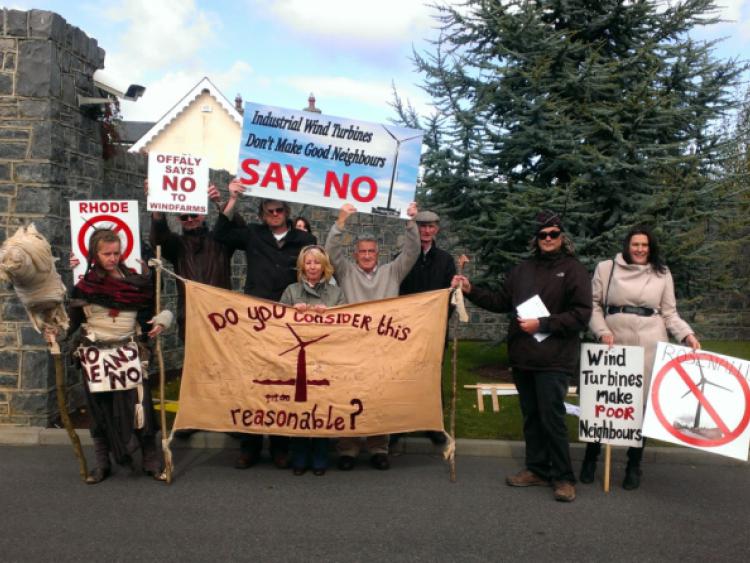 The Taoiseach and Fine Gael ministers were greeted with angry protesters when they arrived to Killenard for their think-in.

The Taoiseach and Fine Gael ministers were greeted with angry protesters when they arrived to Killenard for their think-in.

As the wind whipped up its own gale, the protesters’ annoyance grew when ministerial cars drove by without stopping to hear their concerns about wind turbines.

A request to be given five minutes with the party and present a letter listing concerns, was turned down via the Garda on duty at the gate of the Heritage Hotel.

Dep Charlie Flanagan who brought the meeting in his capacity as Fine Gael party chairperson, stopped for a brief discussion, saying a meeting was not possible.

“That’s the level of representation we are getting,” said one protester at the gates.

“They are here to discuss what’s going to be said in the Dáil, and we are here to say that our issue should be highlighted. These turbines are being imposed on communities with outdated guidelines,” said protester Charlie Gorman from the Slieve Bloom Wind Turbine Awareness group.

“It is important for us to keep coming out in public, they are not engaging with us, this is our only forum. The Irish Wind Energy Association have huge access to Government,” said another protester.

A resident of Rhode in Offaly, where four companies are planning different windfarms, questioned why the Environmental Protection Agency was not involved.

“We want them involved, both for environment and health implications,” he said.

Michael and Dorothy Keane from Roscommon came to support the protest.

The couple recently abandoned their home because noise from two 100m turbines that are 700m away.

“We are at a total financial loss. Greenwire say there are no reports to say values are affected, they might like to buy our house so.

“Companies don’t want any separation distance guidelines, they want these outside our front doors, but not theirs,” said Mr Keane.