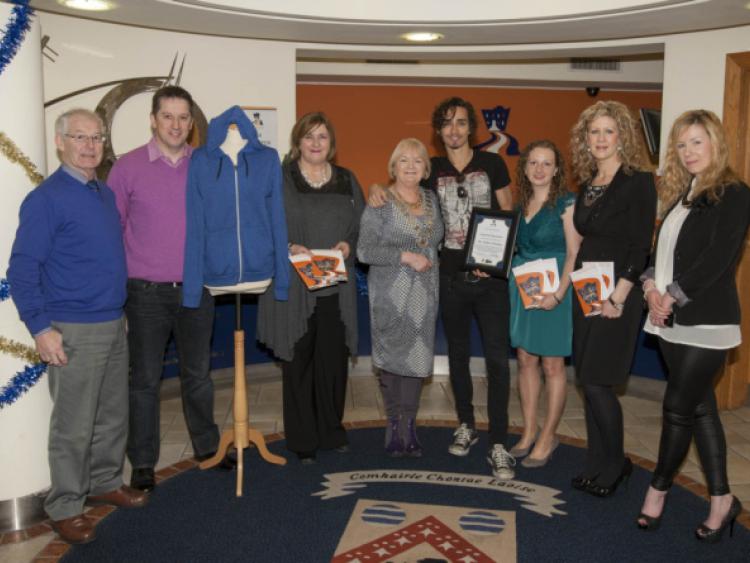 Actor Robert Sheehan returned to his hometown of Portlaoise this Christmas, and while home, he paid a special visit to the Dunamaise Arts Centre.

Actor Robert Sheehan returned to his hometown of Portlaoise this Christmas, and while home, he paid a special visit to the Dunamaise Arts Centre.

There he presented the infamous blue hoodie, as featured on his character ‘Darren’ in Love/Hate to the Dunamaise Arts Centre, where he began his acting career with Laois Open Door Theatre Group.

The hoodie was presented over the Christmas holidays to the centre’s manager Michelle de Forge and Chairman Louis Brennan at a private reception where Robert was presented with a certificate of his Ambassadorship for the Dunamaise.

The blue hoodie will now be framed and displayed as a permanent fixture within the arts centre and will be available for the public to view from a date to be announced.

Robert Sheehan, who began his acting career at the Dunamaise stage, is best known for television roles such as Nathan Young in Misfits and Darren in Love/Hate, as well as the 2009 film Cherrybomb alongside Rupert Grint.

However he has had a number of television roles and features, including Foreign Exchange, Young Blades, The Clinic, Bel’s Boys, The Tudors, Rock Rivals, Bitter Sweet, Red Riding, Misfits, Coming Up, Love/Hate, Accused and Me and Mrs Jones.

He has also co-starred in the film Killing Bono, alongside Ben Barnes, as Ivan McCormick. In 2011, he starred in John Crowley’s production of JM Synge’s comic play The Playboy of the Western World at the Old Vic Theatre, London alongside Love/Hate actress Ruth Negga.

He has three IFTA nominations and one BAFTA nomination. He also shared a BAFTA award with the cast of Misfits.

In 2013 he portrayed Simon Lewis in the film adaption of The Mortal Instruments book City of Bones. Other film credits include A Turtle’s Tale: Sammy’s Adventures, Season of the Witch, Demons Never Die, and The Borrowers.

No doubt 2014 will be another busy year for the successful actor. For more see www.dunamaise.ie.