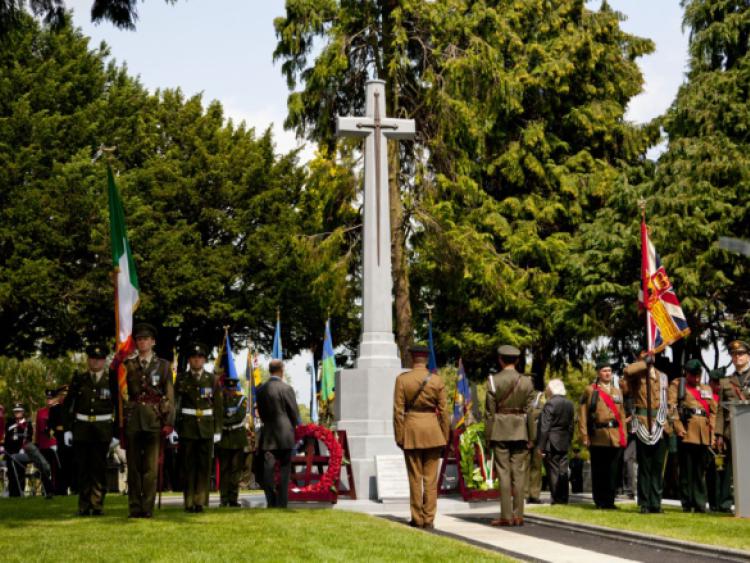 A Laois company took pride of place in an historic occasion when the Cross of Sacrifice was unveiled at Glasnevin Cemetery.

A Laois company took pride of place in an historic occasion when the Cross of Sacrifice was unveiled at Glasnevin Cemetery.

It is unlikely that McKeon Stone will undertake a more significant project than the commemorative cross they made which was officially unveiled by President Michael D Higgins and the Duke of Kent, Prince Edward.

“There was tremendous colour, pomp and ceremony,” said Niall Kavanagh, managing director of McKeon Stone, of the event he and his wife Madeline attended. He said there were several army bands and members of the Irish Defence Forces and Navy as well as representatives from the British Army. “All the great and the good were there”.

Commenting on the vocal protest from Republicans outside, Niall said it was an “irritant”. “We were celebrating Irish people...and here were these fools outside shouting ‘Brits out’ and ‘Higgins you’re a traitor’. It was so pathetic,” he said.

He said a lot of planning and organisation had gone into the event. “We were remembering our own. It took us one hundred years to have the guts to put up a Cross of Sacrifice,” Mr Kavanagh said. He added that Ireland was only the country involved in World War 1 which didn’t have a cross erected.

McKeon Stone has been working with the Commonwealth War Graves Commission for the past ten years on a number of projects. This involved making hundreds of headstones but the Cross of Sacrifice was the largest project they undertook. “It was very symbolic that it was placed in Glasnevin Cemetery,” Mr Kavanagh said. He added that their piece is very close to Charles Stewart Parnell’s grave.

As well as being present on such a monumental occasion, Mr Kavanagh also spoke with the main dignitaries. During a conversation with President Higgins Mr Kavanagh explained that he was from the company behind the cross - and “he dragged me across and introduced me to Prince Edward” Mr Kavanagh said.

The Cross of Sacrifice is one of the “most significant and iconic things” in the cemetery, Mr Kavanagh said. He noted that many people from Laois were involved in the Great War including his own grandfather Jimmy Brown and his granduncle Jimmy Brown who was killed in Ypres, and is commemorated on the memorial at Millview in Portlaoise. Both had served with the Leinster Regiment.