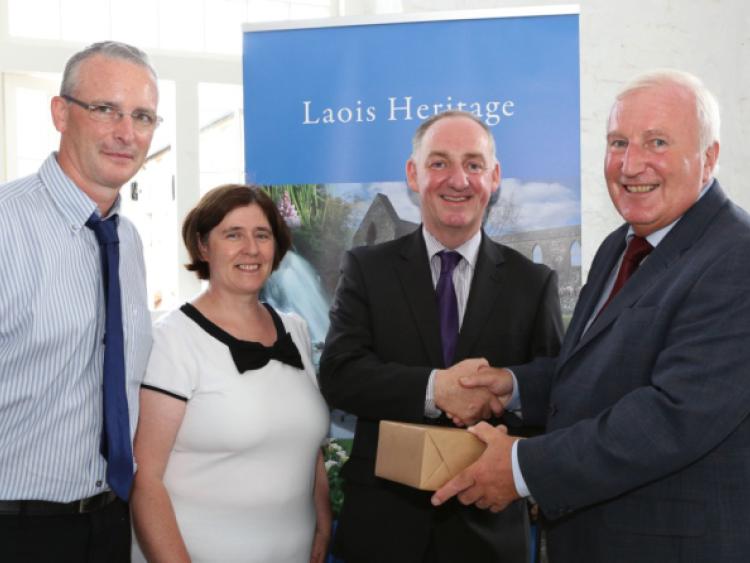 Outgoing Laois County Council manager Peter Carey got a warm farewell at the July meeting, where he counted the recent payroll contract as a proud achievement.

Outgoing Laois County Council manager Peter Carey got a warm farewell at the July meeting, where he counted the recent payroll contract as a proud achievement.

“There is no question but that Laois shouldn’t have got that project, it punched above its weight,” he said of the contract, which will handle payroll and pensions for all of Ireland’s local authorities, eventually employing 72 staff on the top floor of county hall.

“It’s a difficult job, a cutthroat job,” he said of being a county manager, thanking his wife Catherine who attended his final council meeting.

“I have the easy part, but we had to keep moving house and that’s never easy,” he said.

After nine and a half years as manager in Laois, the Carlow man is taking on the role of Chief Executive of Kildare County Council in the coming weeks, but he will continue to live in Laois.

“I’ll be knocking on your door for a vote,” said Cllr Padraig Fleming, who with all the councilors wished him, his wife and their three daughters Niamh, Sinead and Aine, well for the future.

They listed the many achievements during his decade as manager, particularly in tourism and amenities, such as playgrounds, the regional Rose final, JFL summer school, leisure centres, libraries, community centres and the newly restored Donaghmore workhouse.

Mr Carey said he was humbled at all the compliments “scarcely deserved”.

“I tried to achieve a better quality of life. I am very proud of what we achieved. We have an excellent staff, hugely committed. They punch above their weight and are the best asset we have. We are known as a can-do local authority and I was proud to serve as manager,” he said.

He thanked the county councillors for their work.

“You are forced to go out and knock on doors, and I respect that,” he said.

Over his tenure, €1 billion was invested in Laois, in housing, roads, water treatment and social amenities.

“The local authority is a huge player in the local economy. Laois County Council managed to achieve a huge amount over a difficult period of time,” he said.

“I will be leaving Laois with a sad heart, but looking forward to Kildare. I will keep a fond eye on developments and wish Gerry well in taking over the hotseat,” he said.

Director of Services for finance Gerry Murphy will be acting Chief Executive.

He listed some figures on spending under Peter Carey’s leadership, including €300,000 on housing.

“With €600 million in revenue expenditure, it highlights the impact of the local authority on Laois’ economy. His present role in the shared paroll will see benefits for years to come. Certainly it will be difficult to equal for the next ten years, and I thank him for his guidance,” he said, noting it was third Laois county manager in a row to move on to Kildare.

Former Cllr Marty Phelan was invited to return to the mic to add his farewells.

“Peter did some service. He was always working on something. I had a few good trips with you to Tennessee and to New York. You left a good impression on us and on your county. I will see you at the Curragh,” he said.

“He regenerated Laois with new thinking. He was very approachable but there was a tough side to Peter too, I admired his tough stance on some sensitive issues. He is going to be hard to replace,” she said.

“He hit the ground running and was never afraid to try new things, a great man to meet groups which was one of the failings of previous managers,” said Cllr Willie Aird.

“You can judge a company by its boss, and the staff here are exceptional. That comes down from the top. I hope you can get the All Ireland for Kildare, that’s the only thing you haven’t achieved for Laois,” said Cllr Noel Tuohy.