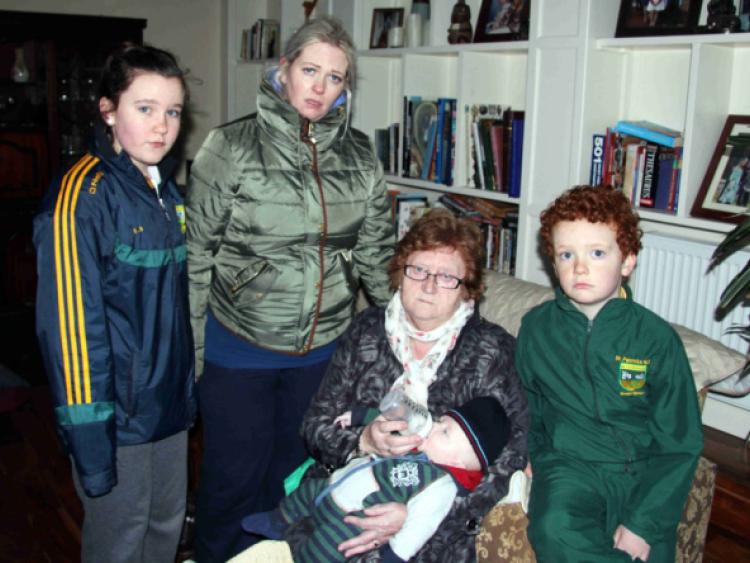 “You may pray to your guardian angels that we get home safely.”

“You may pray to your guardian angels that we get home safely.”

These were the words Colette Brennan told her children as they left their home in Ballylinan in the stormy weather last Wednesday February 12.

And so they did get home safely that day, but only after a lucky escape, when a huge tree came crashing down on top of the family’s car on the Block Road in Portlaoise.

Ms Brennan, her mother and three of her children were in the car when the incident occurred around 3.30pm. The youngest child was aged just 14 weeks.

“I’m just in shock. It was so surreal, the size of the tree. At least we’re alive though, that’s the main thing,” she told the Leinster Express at the scene.

Ms Brennan was driving towards the hospital when a smaller tree fell in front of her car and blocked the road.

“I turned around and started driving back towards the Stradbally road, and two seconds later this huge tree came crashing down on top of us,” she said.

Ms Brennan and her family were saved because of the way the tree fell.

“It was hard to describe. It was like the weight of the tree almost swept the car to one side and that’s what saved our lives,” she said.

Before the family left for Portlaoise that day, Ms Brennan’s son Eoin pointed out that the stormy weather was getting worse.

“It’s weird when you think of it. I told him you may pray to your guardian angel that we get home safely,” she said.

John and Joan O’Connell took the Brennan family into their home on the Block Road until Ms Brennan’s husband Oliver arrived.

Kevin Bracken, owner of the Gala Service Station on the Stradbally road, expressed his shock.

“The sheer size of that tree is unbelievable, and it’s such a busy junction. How nobody was killed is amazing.

“Only for it was in between the two school times, it could have been a lot worse,” he said.

Damage to the ESB line cut off all power in the area, and services in Bracken’s Gala came to a standstill for three hours.