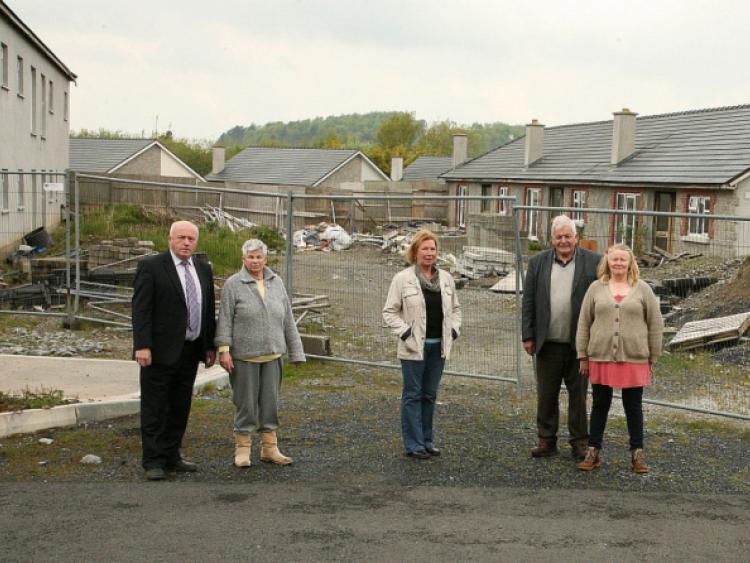 Elderly residents of Droimnín retirement village in Stradbally are calling on the developer and Laois County Council to tackle health and safety issues, backed by Cllr Tom Mulhall.

Elderly residents of Droimnín retirement village in Stradbally are calling on the developer and Laois County Council to tackle health and safety issues, backed by Cllr Tom Mulhall.

Designed for retired people, with a “high standard of finish and low maintenance”, most of Droimnín’s 36 houses and a large apartment block were left incomplete since the economic downturn, with just the retirement home and ten houses now occupied.

“The priority is to get the lights on, it gets very dark here in winter,” said one lady, who is worried about a deep hole near her house, partly covered by a concrete block.

“People have grandchildren visiting, who run from one house to another, they don’t know which houses to avoid. The site should be fenced off with something easy on the eye. It was partly boarded up but a gust of wind will bring that down,” she said.

“The whole issue is to try to get the site made safe. It is a crying shame, this could be so nice,” she said.

Nine houses are occupied by council tenants, withcarefully tended lawns and flowers, but just beyond lies an open abandoned building site, littered with building materials, partially screened with hoarding. Evidence of a bonfire and broken windows are leading to fears of anti-social visitors, while rats and mice have also been a problem.

One bungalow at the back, still owned by the developer Gerry Delany, is rented out. With its pretty flowerbeds, it is strangely isolated in the building site, but it prevents the site from being fenced off.

One angry tenant claims the developer will neither give the bond over to pay for paths and lights, nor finish the site.

“We are fed up with being fobbed off, it’s a feeling that no-one gives a damn,” she said.