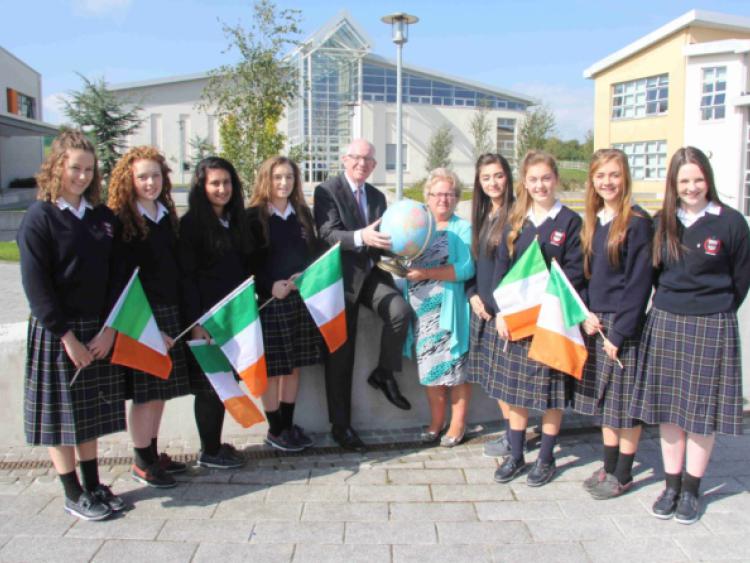 Irish students have been invited to play a part in global affairs in a new programme launched in Portlaoise last week by Minister for Foreign Affairs Charlie Flanagan.

Irish students have been invited to play a part in global affairs in a new programme launched in Portlaoise last week by Minister for Foreign Affairs Charlie Flanagan.

It was a trip home to Laois not just for the minister, but also the Secretary General Niall Burgess, whose father was principal in Ballylinan NS for 40 years he told students.

“We were delighted the Minister chose here to launch it, and the students themselves responded very positively, they knew what they wanted to ask and were concerned about, and I think that’s what he is tryng to encourage,” said teacher Freda Delaney, who with TY co-ordinator Ann Dollard will be guiding students through the programme.

TY students nationwide can write an essay or make a video on the theme of ‘Ireland’s Values’, to be submitted this November.

Thirty winners will spend a week in the Department of Foreign Affairs and Trade, where they will visit foreign embassies to see diplomacy in action, from promoting trade to protecting Irish people abroad, to working to eradicate poverty, while sharing their views on Irish foreign policy.

“This is a great opportunity to show the next generation why Ireland’s foreign policy matters to the everyday lives of ordinary citizens,” Minister Flanagan said at the launch last Monday September 22.

“Our prospects for economic growth and security depend on our strong international engagements. It is in all our interests that Ireland’s voice and our values are reflected in global dialogue and I look forward to hearing the views and hopes of young Irish people, our next generation of leaders.” he said.

The Programme will also involve visits by department officials to schools to explain their work.