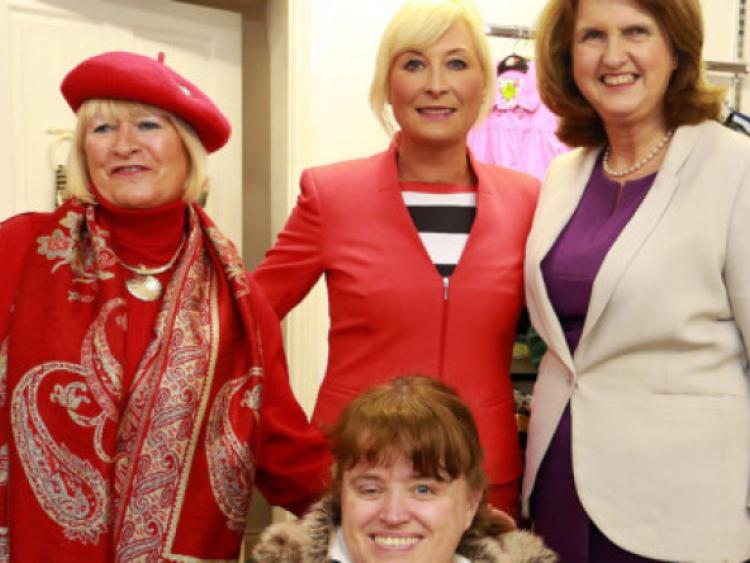 “If you fall there is a good cushion, but it should lift you back to employment” she said.

Minister Burton, who is Labour’s director of elections, visited businesses and community groups in Portlaoise, Portarlington and Mountmellick, launching the campaign of Labour’s only sitting councillor in Laois, Lisa Delaney from Mountmellick.

Asked if the drop in support for the Labour party would be felt by the three Laois candidates, she said they were “rooted in the community” but need to get out and campaign.

There is “no magic wand” to national recovery she says.

“We set ourselves a target to get the country back in the recovery position. We have tried to do this as fairly as possible. The previous government cut weekly welfare payments by a total of €16,40. That is still being felt,” Minister Burton said.

She says she has protected core social welfare payments.

“That has protected small towns, where pensioners and families on social welfare live and spend their income,” said Minister Burton.

She agreed that public servants who number highly in Laois between the prisons, hospitals, schools and department of agriculture, have borne the brunt of income cuts.

“The Haddington Road agreement helped the country to exit the bailout and it is up for discussion and negotiation in 2016. There has to be a dividend in the recovery for public servants. In some casese between pension and salary cuts and tax rises they are down well over 25 percent,” she said.

The minister intends to take back to the Dáil the message that Laois needs jobs.

“We need to see foreign direct investment spreading outside Dublin. Portlaoise is only just over an hour from the airport. We need to persuade the IDA to come to the likes of Laois,” she said.

Unemployment figures fell to their lowest since 2009 last week, at 397,000, and more employer incentives are on the way said the Minister, who visited businesses employing TÚS workers.

“People who entered into mortgages are still feeling the pinch, what we have to do is get people back to work. Every person back to work saves €16,000 to €25,000. Once we do that the overall cost goes down,” she said.

Incentives like the new ‘Jobs Plus’ scheme, which pays employers up to €10,000 spread over two years to take a person off long term unemployment, will help to “kickstart” the recovery, and will “pay for itself” she added.