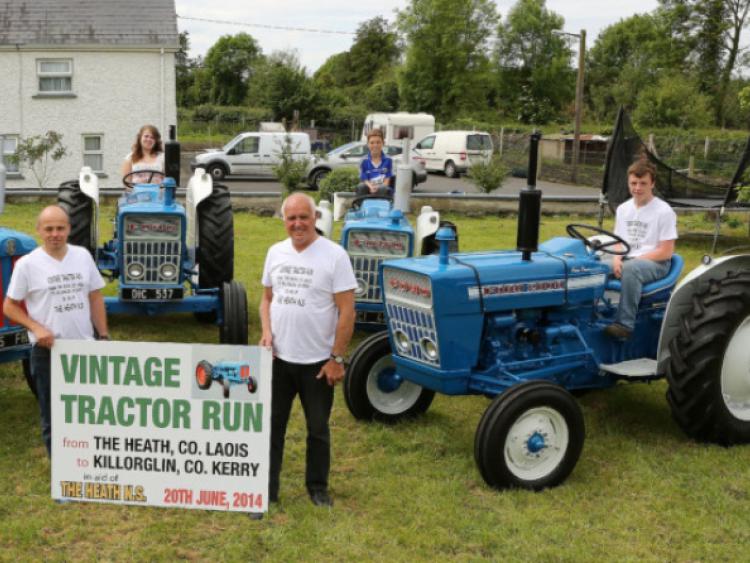 Peter Dunne is to undertake a fund-raising tractor drive from The Heath to Killorglin, Co. Kerry to raise funds for the Heath NS.

Peter Dunne is to undertake a fund-raising tractor drive from The Heath to Killorglin, Co. Kerry to raise funds for the Heath NS.

With a planned four classroom extension for the school the money will be very gratefully received, explained school principal Donna Sheeran.

“It’s brilliant for the school. Peter does a charity event every year and we are delighted he chose us this year,” she said.

“We just got planning permission for for new classrooms so any money he raises will go towards that,” Ms Sheeran said. She added that the money may be used to provide playground equipment at the school, adding that whatever they eventually decide upon, the money will most certainly be put to good use. “We are absolutely thrilled he chose us,” she said.

With the school hosting its annual sports day on Friday, Peter can expect a big send off as he heads off in his vintage tractor to the south of the country.

Peter plans to head off on his journey around 2pm on Friday and should reach his destination by Sunday evening.

“I am looking forward to it,” he said. He said he chose Kilorglin as he has relations there. While he may know how to get there, Peter said he hasn’t quite planned where he will stay along the way and will pull into hotels as he makes his way from Laois to Kerry. While there will be costs involved for accommodation and fuel etc. Peter said all this will be covered by him, so any money raised will go directly to the school.

“It’s great to be able to do something, even if we only raise €1,000,” Peter said. With some of his own children going to the school, Pter said he is aware of the pressures placed on schools with funding cuts. He is something of a veteran of such events having undertaken charity events for St Brigid’s Hospital at Shaen in the past. He has been involved in many vintage rally events locally for the past decade and also undertook longer journeys as far as Fermoy.

Peter plans to vist the school before Friday to present some t-shirts and drum up more publicity for the event. With sponsorhip cards available in Treacy’s in the Heath and through the school, offering lines for as little as €2 and books for €20, the endeavour is sure to raise much needed funds for the school.

No doubt excitement will be at fever pitch at the school on Friday when the popular local man heads off for the wilds of Kerry and the several hundred miles round trip.