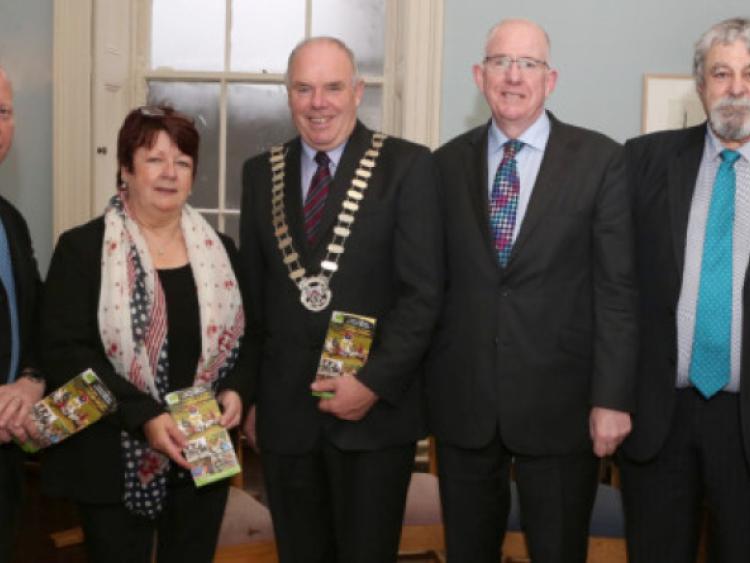 A calendar of Laois festivals and events which will take place over the next 12 months was launched in Emo court tea rooms, last week.

A calendar of Laois festivals and events which will take place over the next 12 months was launched in Emo court tea rooms, last week.

Chairperson of the Laois Festival and Events, Kevin Croke, explained that they had their origins in “The Gathering” during which time Laois Partnership ran a series of training evenings to facilitate groups and individuals to organise gatherings.

“It was during the training evenings on Facebook that mentor Liz Kennedy Burke raised the possibility of the group forming some sort of an organisation that might be mutually beneficial for all.”

A committee was formed, and gave themselves an initial target of having hard copy information on Laois Festival and Events available at the Ploughing Championships.

The committee’s objective is to promote Laois festivals by using the “network of organisations in the group to mutually support, publicise, help, promote, share information and liaise with the relevant authorities to best support the group

“I would like to first acknowledge the great work being undertaken by both statutory and volunatry agencies all promoting the blue and white,” said the Minister for Foreign Affairs and Trade, Charlie Flanagan.

He said there was plenty of opportunities for people to enjoy their leisure time across the county through the many events which take place. Minister Flanagan said it was also pleasing to see a calendar of events for 2015, well before the festive period.

The Minister pledged his support to festivals which he said in recent times had “done us in Laois proud through their vigour, innovation, determination and success.”