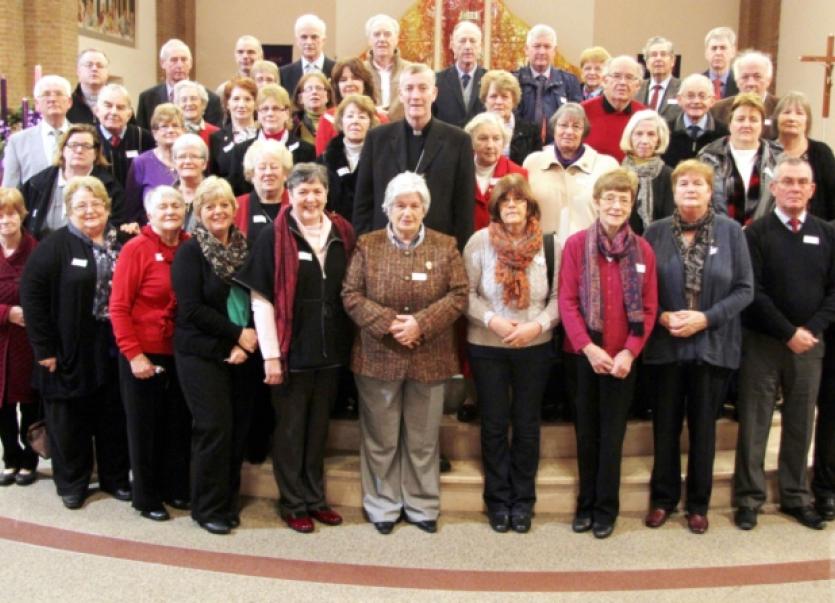 A group of  lay people, sent as delegates by parishes throughout the diocese  have been training during the past four months, as part of the development and expansion of The Diocesan Eucharistic Adoration Committee.

A group of  lay people, sent as delegates by parishes throughout the diocese  have been training during the past four months, as part of the development and expansion of The Diocesan Eucharistic Adoration Committee.

This was organised by John Howard and Brendan Cleary of the  National Committee of the Apostolate of Eucharistic Adoration, with the encouragement and support of Bishop Denis Nulty and the priests of the diocese.

The Diocesan Committee was commissioned at a special Mass celebreated by Bishop Denis Nulty, on December 6, last year in Portlaoise.

This adoration committee is trained to set up a system of viable weekly adoration in any parish of the diocese, at the invitation of priests. Where a previous system exists, then the task undertaken is to strengthen and expand it.

Already, to date, 14 parishes have requested a weekend presentation from the committee.  During the training period, two adoration centres have been renewed, in Monasterevin and Abbeyleix. It is expected that there will be a great uptake from parishes of the diocese early in 2015, and ten contact teams are available to brief parishes that make contact.

The Chairperson of the new Committee is Bro. Matthew Hayes, who may be contacted at 086 3822247, 057 8755964, or email: bromatthewhayes@gmail.com. While the Spiritual director is Rev Ruairi ÓDómhnaill.

Further details can be obtrained from writing to the Adoration Committee secretary, Elizabeth Murphy, 7 Glenbrrok, Ballyroan by emailing: murphylizLS@gmail.com.