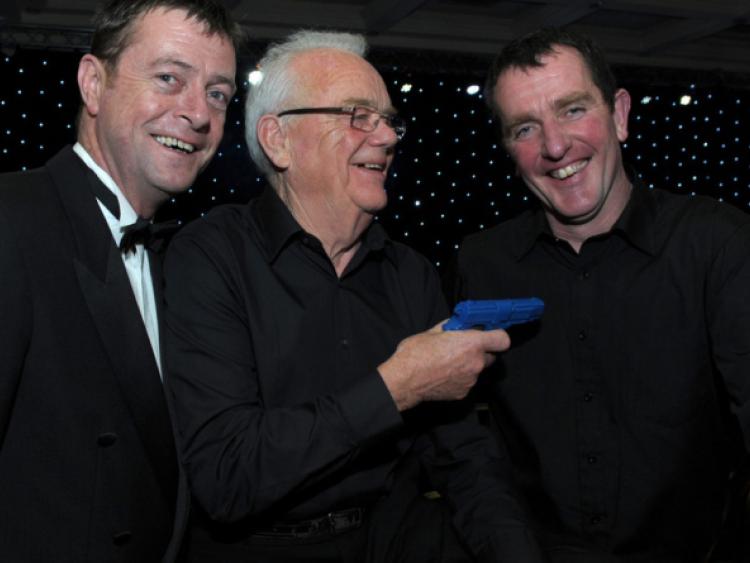 It was a full house when Hazel Conroy from Portlaoise and Butch Horan from Mountmellick were crowned ‘Strictly Dancing’ winners in the Portlaoise Heritage Hotel, last Friday, May 17.

It was a full house when Hazel Conroy from Portlaoise and Butch Horan from Mountmellick were crowned ‘Strictly Dancing’ winners in the Portlaoise Heritage Hotel, last Friday, May 17.

The event was hosted by Portlaoise Rugby Club and well known local Portlaoise members of the community, such as Walla Brown, Mags Conroy, Scott Lawless, Bernadette Rigney, Ciarán Reilly and Sharon Kavanagh, danced to either the ‘Tango’, Charleston’. the ‘Jive’ or the ‘Salsa’ to a cheering audience.

Perhaps the biggest cheer of the night came when 78 year old Noel Ryan entertained his audience and his partner, well known panto actress, Joan White, with his James Bond dance. Using a toy gun to prevent anyone else from stealing his partner, he charmed Joan as they performed the tango to shrills of laughter from the audience. The winning dancers are still deciding what club or chairty will receive their €1,000 prize money.

Chairperson of the organising committee, Pauline Madigan, thanked everyone who was involved in making the night such a success including the judges, Paraic Whelan, Laois Rose Sarah Conlon and boxer extraordinaire, Jimmy Keenan, whose comments about each of the dancers performance, had the crowds in roars of laughter.

Ms Madigan also thanked all the sponsors, patrons and volunteers on the night and particular mention was given to the dancers, the dancer’s families and to the organising committee members which included David Coughlan, Judith Smullen, Denis Aldritt, Alison Holmes and Paul Conroy.

The MC for the night was former Miss Ireland and TV presenter, Pamela Flood. Pamela looked resplendent in a dress from local fashion designer, Heidi Higgins and she thanked Bankz Hair and Beauty for doing her hair/make up.