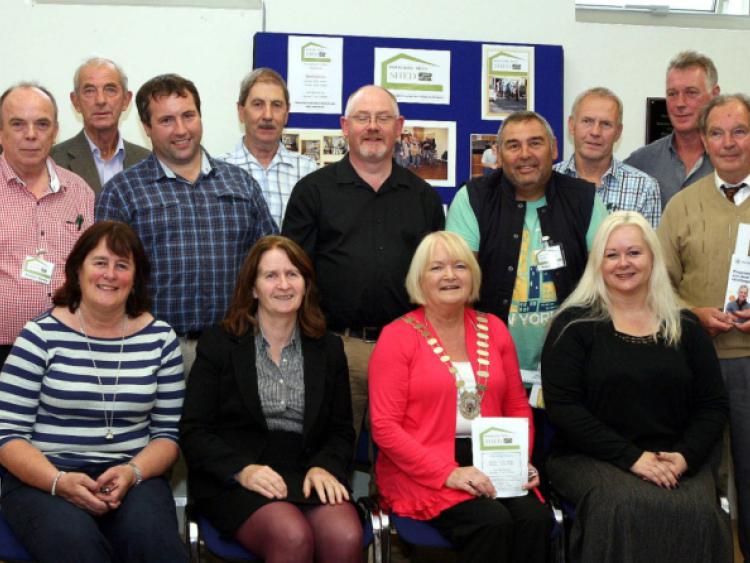 The men of Portlaoise now have a space where they can feel comfortable to open up about their problems, with the launch last week of the Portlaoise Men’s Shed.

The men of Portlaoise now have a space where they can feel comfortable to open up about their problems, with the launch last week of the Portlaoise Men’s Shed.

There was a packed attendance in the meeting room at Treo Nua for the event last Wednesday, held as part of the Laois Connects week.

Mr John McEvoy, CEO of the Irish Men’s Shed Association, explained that a Men’s Shed is a friendly and welcoming meeting place which is open to all men, regardless of age, creed or background.

“It’s more a social club than anything,” he said. “It’s all about social interaction.”

Befitting a shed, Mr McEvoy said that most of them contain tools which the “Shedders” use to work on projects, which could be anything from fixing bikes to building furniture.

“But apart from tools, the kettle is the most important part,” he said.

A lot of the “Shedders” are unemployed, but the shed now gives them a reason to go out into the community and be productive. Mr McEvoy also highlighted how the sheds can offer a good support network.

“If Paddy turned up every day for ten weeks and then one day didn’t turn up, someone would think to check on him,” he said.

The coordinator of the Portlaoise Men’s Shed, Mr Ray Harte said that the biggest challenge the initiative faces is getting men to engage. He explained that the Portlaoise shed began 12 months ago and he has met “some of the best people ever”.

“It allows us to feel good about ourselves, men like to be busy, it’s a community. If we get all our heads together we would fix this country. We are open for business,” he said.

Also present at the launch were representatives of the Men’s Sheds in Rathdowney, Abbeyleix, Roscrea and Athy, and there is also one in Portarlington.