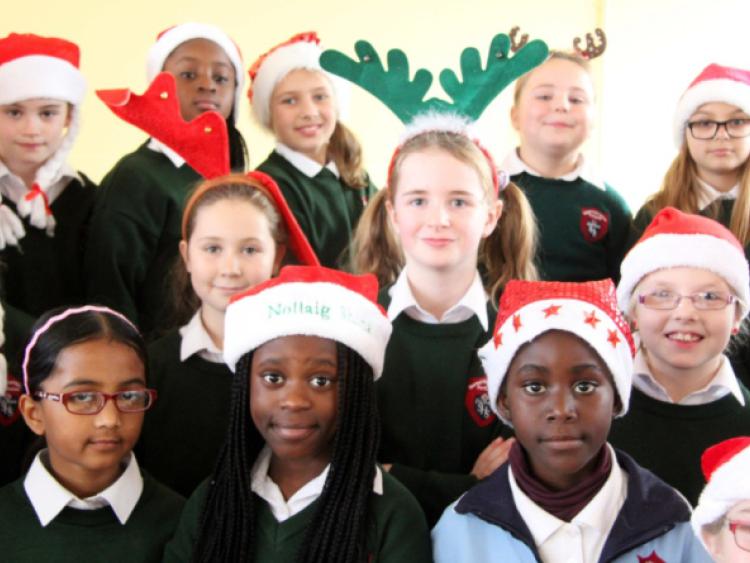 It’s not easy to calm over 180 excited little girls in santa hats, but Portlaoise Sacred Heart NS’s choir and music teachers had all in hand at rehearsals in the hall last Thursday.

It’s not easy to calm over 180 excited little girls in santa hats, but Portlaoise Sacred Heart NS’s choir and music teachers had all in hand at rehearsals in the hall last Thursday.

The choir is made up of second and third class girls, who are busy practicing for their upcoming festive performances.

“We will have a concert the last week before the holidays for parents, in the Kyle centre as a fundraiser for the school, and we hope in the library. We do all the favourites, Jingle Bells, Walking in the Air, Frosty the Snowman, they love it,” said Edel.

The school band are fourth, fifth and sixth class.

The tradition of music goes back a long way in the school, which dates back itself to 1844.

Ann Whelan who teaches fourth class was in the band herself in the 1970’s.

“I learned with Mary Campion and Sr Finbarr. We wore tartan skirts with a tan shawl,” she recalls.

“Every child is taught the recorder, and they also learn the bell lyre and hand bells. Some children play instruments they have learnt outside, like the violin or flute. Their favourite time is Christmas, they always get such positive feedback from the audience, and they take great pride in being a part of it,” said teacher Orla Coughlin.

“The band is very inclusive, we have instruments for children of all needs, everyone has a place,” she said.

She has her own favourite piece that the band perform.

“They play a harmonised piece of In the Bleak Midwinter, it is beautiful,” said Orla.

The eight girls that form the handbell choir are splendid in their white gloves, each girl holding a pair of gold bells which sound a different note.

“I have no idea why we wear them, but they look nice,” said Molly McCabe .

“We like playing them because we always wanted to, but only 6th class get to play them, and only at Christmas for the carols,” said Rebecca Reddin.

She loves playing at the Kyle Centre for shoppers.

“We get a box of sweets, we get out of homework and it’s fun, and it means it’s closer to Christmas,” she said.

Sahar Hanid aged 12 plays a drum in the band.

“I love playing it,” says Sahar who is originally from Sudan and uses a wheelchair, assisted by her SNA Ciara.

“Half the school are involved, we will t ake it on the road and try to bring the spirit of Christmas to Portlaoise, there is nothing like the sound of children performing carols,” he said, praising the teachers for their effort.

“They put a lot of preparation in, figuring out what songs suit the group. It is a lot of hard work but there is a tangible result. We will have a concert for parents and one for the children, for me it is one of the highlights of the year,” he said.

It may be the penultimate Christmas for the school on Church Avenue, as construction has begun on two new parish schools in Aghnaharna.