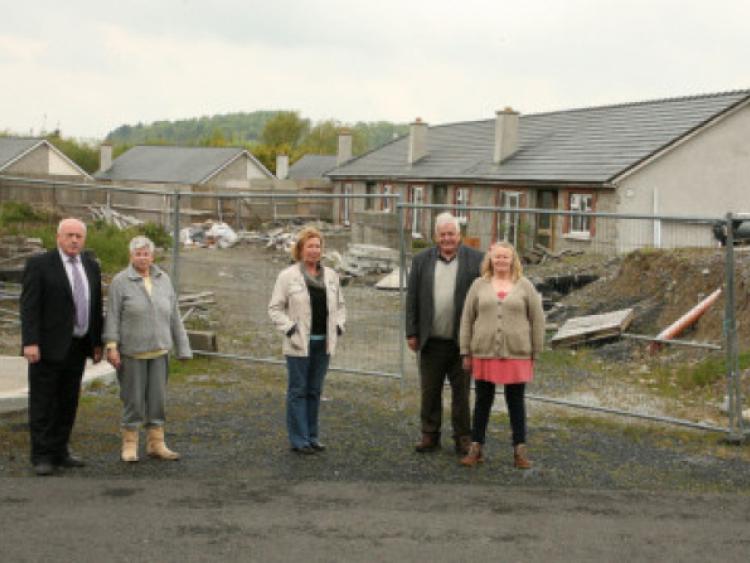 Houses in a ghost estate in Stradbally should be finished off and offered to people on the housing list, according to Emo Cllr Tom Mulhall.

Houses in a ghost estate in Stradbally should be finished off and offered to people on the housing list, according to Emo Cllr Tom Mulhall.

Droimnín retirement village once promised to have a “high standard of finish and low maintenance”.

While the nursing home and ten houses have been completed and occupied, for several years the rest of the site has remained an unsecured building site, with a unfinished apartment block and 24 houses left unfinished, some with broken doors and windows, attracting anti -social behaviour.

“Every time I drive into that estate, it is worse. These houses are deteriorating, the doors and windows are open and broken and the houses getting damp.

“It is terrible to see these lovely houses lying idle, and that large apartment. It is a damn pity to say it’s going on for so long,” he said at the Graigucullen Portarlington Municipal District meeting.

The council is waiting for documents to price the work and is considering using a cash bond they hold as security, to finish off the roads, paths and lights, but this will not cover finishing the houses.

“The bond will only cover the ground works, but there is so much demand for social housing in Stradbally, it is a terrible pity to see 24 nice two bed houses deteriorate. I know it was down for a retirement village, but at this stage, they would be ideal for young people or single parents. I would welcome if they were put up for sale, and a developer came in to buy and complete it,” Cllr Mulhall said.

Last May 2013 residents told the Leinster Express they were angry that the building site was not fenced off or lit.

There were holes left in the paths, and evidence of anti social behaviour with broken windows and fires.

One lady summed it up.

“We are fed up with being fobbed off, it’s a feeling that no-one gives a damn,” she said.