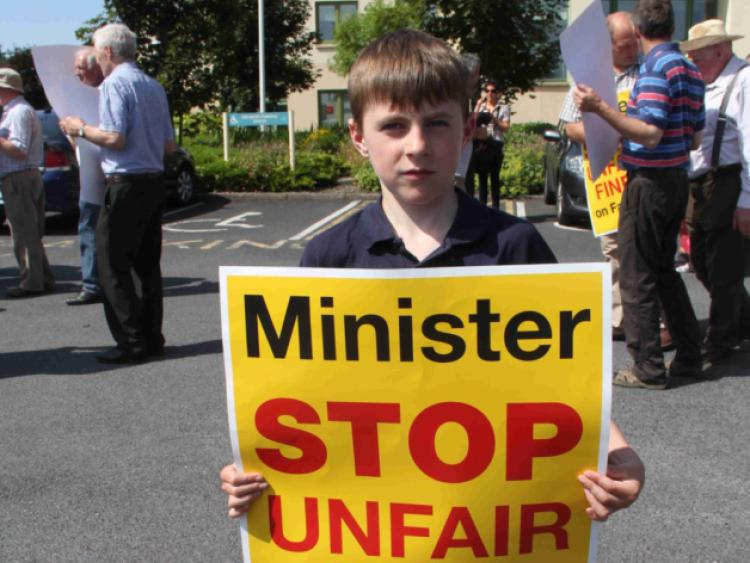 UP to 400 farmers from Laois and beyond gathered outside the Department of Agricultutre buildings in Portlaoise last Friday to protest against the Government imposing what they describe as unfair fines on farmers.

UP to 400 farmers from Laois and beyond gathered outside the Department of Agricultutre buildings in Portlaoise last Friday to protest against the Government imposing what they describe as unfair fines on farmers.

Speaking to the Leinster Express afterwards Laois IFA chairman Pat Hennessey said that farmers are “trying their best to do everything right”, adding that the Government is imposing “serious penalties” on farmers.

He said that the IFA are calling on the Minister for Agriculture Simon Coveney to have a warning system in place. “Not every farmer is up to date on all the regulations. We are asking for a warning system for them. It would be like football when you get a yellow card before a red. The penalties have increased five-fold in three years”.

Mr Bryan has requested an urgent meeting with the Minister for Agriculture Simon Coveney demanding a “full and transparent explanation on the massive increase in inspection penalties imposed on farmers across the direct payment schemes over the last four years and especially in 2012. This increase has occurred despite the fact that the Minister gave a commitment to farmers that the wet weather conditions in 2012 would result in a less onerous inspection regime taking account of the difficulties that farm families were facing”.

He told those protesting that the IFA have continually challenged the Department on inspections and the level of penalties being imposed on farmers. “Despite IFA’s concerns on fines the Department officials repeatedly stated that there was no significant increase in penalties. The Minister for Agriculture must follow through on his commitment for a New Charter of Rights for farmers with fewer inspections, greater tolerances and reduced penalties”