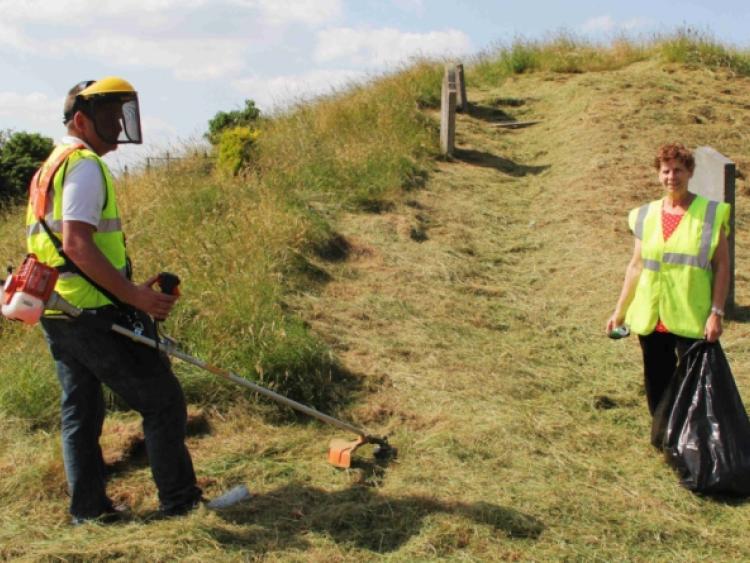 The old graveyard on the Ridge Road has been getting a badly needed clean up in recent weeks.

The old graveyard on the Ridge Road has been getting a badly needed clean up in recent weeks.

Currently, there are two men working hard to clean up the old burial ground which dates back to the 1700’s.

“We have two Tús workers from Laois Partnership working with the Tidy Towns on different projects,” Kathleen O’Brien who is a member of the Tidy Towns and the Burial Ridge Group explained.

“We are delighted to see work start on the Ridge Road graveyard, as we were anxious to get work done there.

“The two guys are very interested and have been doing a great johb so far, and it’s not easy in this heat.”

Kathleen says the two guys will be doing a general clean up of the Ridge Road graveyard before moving on to other projects in the town.

Kathleen explains: “It’s just a general clean up, get the grass down which badly needs to be done.

“The graveyard dates back to the 1700’s and it is unique because it is built on an esker, graveyards are never usually built on a hill.

“About two years ago we recorded a lot of the names on the tombstones in the Laois Heritage Journal, which was compiled by Noel Hume.

“At the time they cleaned off a lot of the graves and we hope to get it back to the same status now.”

Kathleen and the Burial Ridge Group, which is mainly made up of local residents, are also looking for volunteers to help maintain the graveyard to ensure that it does not get as over grown again.

Last year the Ridge Burial Group erected railings in the laneway, and all the railings have now been completed.

“We saved over the years to get the railings and we’re very pleased with them. They look well.

“It’s great to see the work taking place in the graveyard and we hope that we will get some volunteers now that will maintain it for the future,” Kathleen added.