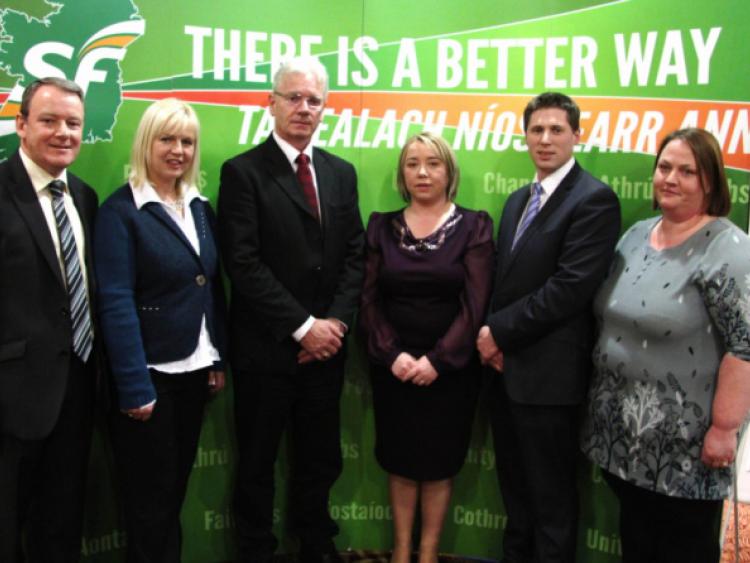 Introduced at the convention were the party’s County Council candidates for the May 23 local elections: Rhoda Dooley Brogan in the Borris-in-Ossory/Mountmellick area; Aidan Mullins in Portarlington/Graigueculen; and Caroline Dwane Stanley in Portlaoise.

It was Ms Brogan who brought up the issue of ghost estates. She vowed to make them one of the themes of her election campaign. She spoke from experience. With her husband John and daughter Saoirse, she lives in such an estate in Borris-in-Ossory, where, she revealed, only four of 20 houses were occupied.

It was Mr Mullins who told of the twisted umbrella. It belonged to one of his supporters. They were canvassing in Graiguecullen when high winds struck. Undaunted they proceeded with their task, umbrella or no umbrella. An incident that symbolized Sinn Fein determination.

And it was Mr Mullins who also spoke of the hanged IRA volunteers, Peter Barnes and James McCormack. They went to the gallows in England in 1940 after a bicycle pipe bomb had, in the previous year, killed five and injured 60 people in Coventry.

Seemingly, it wasn’t they who had planted the bomb. When, as a teenager, he was living in Ferbane, Co Offaly, Mr Mullins became friends with Paddy Barnes, Peter’s brother.

“If I am elected, I will dedicate my victory to Paddy Barnes,” Mr Mullins vowed.

Caroline Dwane Stanley said people often asked her where she had met her husband Brian Stanley. Her answer? Ireland’s Own magazine. She was joking, of course. Or was she?

Cllr Carthy spelled out Sinn Fein’s ambition in the local and European polls: four MEPs and a party representative on every local authority in Ireland.

“That will be massive. I believe the elections on May 23rd will be a pivotal changing point in Irish politics.”

Deputy Brian Stanley rallied the troops: “We can do it. But only if each and everyone of you puts in the work the next few months. We are the only party running candidates in all of Ireland. Our republic does not end at the border.”

He claimed: “We live in one of the most centralized states in Europe. At the moment the balance of power is tilted towards Co Managers and other senior officials.”

Ms Brogan told the convention she’d been a Sinn Fein member for five years. Property tax and the reversal of education cuts were among her campaign issues, she said.

Cllr Dwane Stanley, a sitting Co Councillor, said she’d been involved in Sinn Fein for 16 years. “If anybody had told me I was going to end up as a Councillor I would have run as quick as lightning,” she declared.

“What has struck me is the lack of women public representatives. At present there are 25 seats on Laois Co Council. Only three women were elected. Now we have five women, after two cooptions.”

She added: “I think I have been a strong voice for working class women.”

Mr Mullins works in the Sinn Fein Portlaoise office. It’s his second time to run in a local election. Last time, he was within 90 votes of winning a seat in the Emo electoral area.

Now, he noted, he was facing a tough task in the newly-created Graiguecullen/Portarlington electoral area. “It’s about 40 kms in length from Port to Graigue,” he estimated, “and that’s a hell of a lot of doors.”

He accused Fianna Fail and Fine Gael of “cronyism,” “back-handers” and “gombeen politics” in their domination of local authorities. He argued: “The only way to change it is to vote for Sinn Fein.”