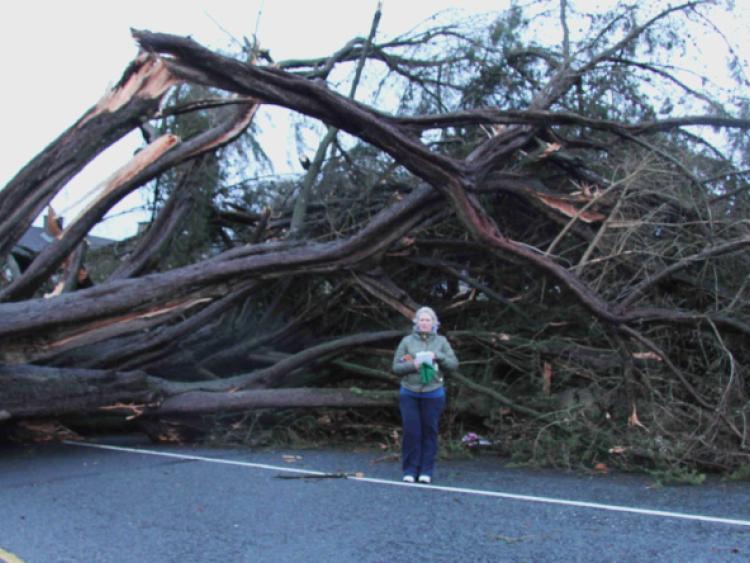 Over thirty 999 calls were made to the fire service, and another 30 to 40 to the council, according to Director of Services Kieran Kehoe.

“We cleared as many trees as we could. The rivers were at risk of flooding in Mountrath and Mountmellick also, and we had flood barriers and sandbags ready in Mountrath,” he said.

All roads were reopened by last night except the Block road, Portlaoise, where a large tree was being removed today.

Two trucks were blown over on the motorway, near Junction 21 at Borris-in-Ossory. There were two incidents of trees falling on passing cars, one on the Block road in Portlaoise involving a family of five, and the other on a country road in Rathdowney involving a lady driver. No one was injured.

Yesterday morning the Cork road in Durrow was temporarily closed after the river Erkina flooded, and the Ballyfin road in Mountmellick was also flooded.

Once the storm hit at 2.30pm, all crews were on deck to attend to fallen trees, according to Chief Fire Officer Declan Power.

“There were trees down from Ballybrittas, Portarlington, Stradbally, Portlaoise, literally the entire county. They were out until ten or eleven last night,” he said.

After the storm came a freeze, and Mr Kehoe says the council gritted national and regional roads at 9pm last night, and again between 7am and 9am this morning, after fresh snow froze on the roads.

Further frost is forcast for tonight, and yet more wind and rain tomorrow.

“We are due to get a bit of a battering again, so drive appropriately, slow down and keep your distance from the car in front, and if there is any loose or insecure objects, secure them so they don’t become a problem again tomorrow,” Mr Power advised.

By lunchtime today ESB workers were still working on restoring power to about 7,500 customers in Laois and surrounding areas.