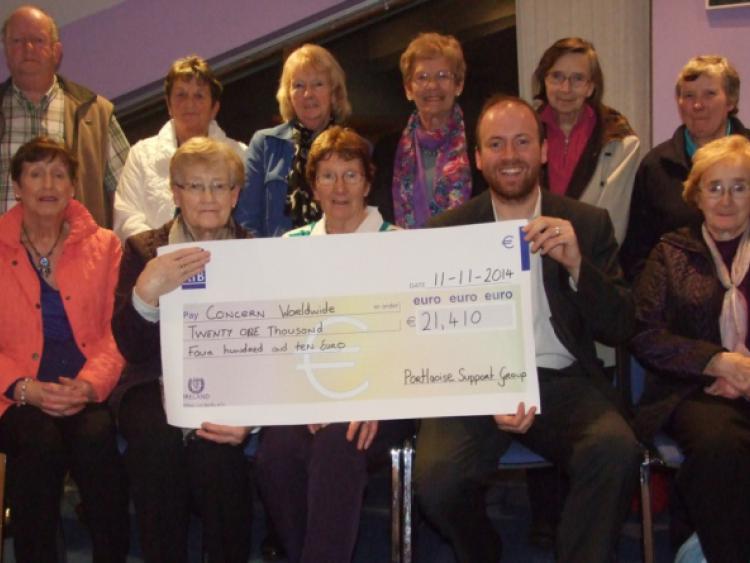 One group of selfless Portlaoise people have raised well in excess of €400,000 for people in third world countries

One group of selfless Portlaoise people have raised well in excess of €400,000 for people in third world countries

Last year alone, the Portlaoise Support Group for Concern raised in excess of €21,000.

“The group have been raising money for Concern for around 40 years. We have a core group of about 12 volunteers but we have hundreds of people who we call on at various times of the year to help out with street collections and the different fundraising events we hold,” Sheila Duff explains.

She continues: “The €400,000 is only since Concern started keeping digital records, I’m not sure how far it dates back but it doesn’t cover the entire length the group have been fundraising.”

Last week, Concern fundraising manager Jonathan Power travelled to the Parish centre in Portlaoise to accept the cheque for €21,000.

Commenting on the group’s success, Mr Power said they were an “amazing group.

“It’s a credit to them and the people of Portlaoise with the amazing amount that they fundraise on our behalf.”

Speaking on behalf of Concern Worldwide he said:

“Because of the Portlaoise public and the amazing volunteers in Portlaoise, hundreds of thousands of euro have been raised with thousands of the world’s poorest people being helped. We hope that the fantastic support from Portlaoise can continue this year and continue to change and save lives.”

Portlaoise Parish Priest, Msgr John Byrne said the volunteers were to be lauded.

“It’s not easy to be going looking for money in these times, especially when there are so many worthy causes at home, but we can’t ignore the concerns of the third world. The work of the volunteers is to be lauded.

“Their work is indicative of the generosity of the people of Portlaoise.”

The group’s PRO, Mairead Culleton appealed for more people to get involved.

Mrs Culleton emphasised the fact that Concern’s accounts are carefully audited and every penny raised can be accounted for.

Already the Portlaoise volunteers have plans for the next fundraiser commencing on Monday, November 24 with a whist drive in Clonad GAA.

The Concern Fast will take place over the following weekend from Thursday, November 27 to Saturday, November 29. There will also be a street collection on those days.

On Tuesday, December 2 there is a Christmas Whist Drive in St Fintan’s Hospital with lots of Christmas fare on offer.

On Thursday, December 4 there is a coffee morning in the Parish centre after ten o’clock Mass.

Anyone wishing to participate in the Concern Christmas Fast or donate to Concern can contact Sheila Duff, or anyone who wishes to volunteer with the group in the future can contact Sheila on 087-6204617 or e-mail her sheiladuff@gmail.com.