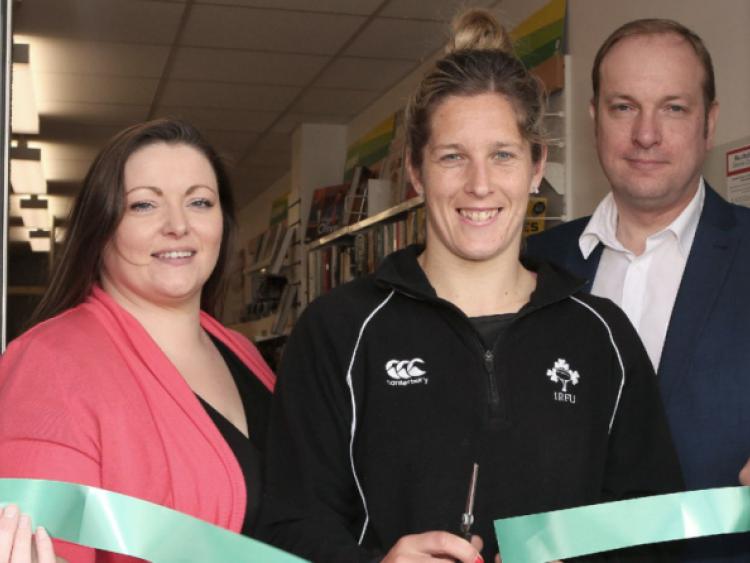 International Rugby star, Alison Miller swapped the rugby ball for a scissors as she helped cut the ribbon and officially open a new Oxfam Ireland shop in Portlaoise on Friday, June 5.

International Rugby star, Alison Miller swapped the rugby ball for a scissors as she helped cut the ribbon and officially open a new Oxfam Ireland shop in Portlaoise on Friday, June 5.

The charity, which has shops across Ireland, opened the new store recently after the window boasted a host of alarm clocks in the week leading up to the opening heralding its arrival. The shop will sell a mixture of high quality clothes, accessories, books, homeware and refurbished computers from the Born Again range.

At the opening, Alison, who plays for Portlaoise club, said: “As a proud native of Laois, I am delighted to officially open the new Oxfam Ireland shop in Portlaoise, the first in the county. Not only will it be a great addition to the shopping scene in the town, but it is also a great way for the local community to give back and help those living in poverty, whether that’s through shopping, donating or volunteering.”

Shop manager Geraldine Gorman, from Mountmellick, explained why people should visit Oxfam Portlaoise: “The great thing about Oxfam Ireland’s new shop in Portlaoise is that it serves the local community while making a global impact. I am from nearby and most of the volunteers live in the town. It’s so rewarding to think that we here in Portlaoise are making a positive difference to families living in poverty across the world.”

Oxfam Ireland’s head of retail Michael McIlwaine went on to say: “We are immensely proud of the new shop in Portlaoise, which in many ways is a flagship store. The inside of the Portlaoise store helps to show people the impact our shops make on our work worldwide.”

Oxfam Ireland shops like the one in Portlaoise are a vital source of income for the charity’s work worldwide, including emergency response in places like Nepal, long-term development projects and campaigning that raises the voice of the voiceless.