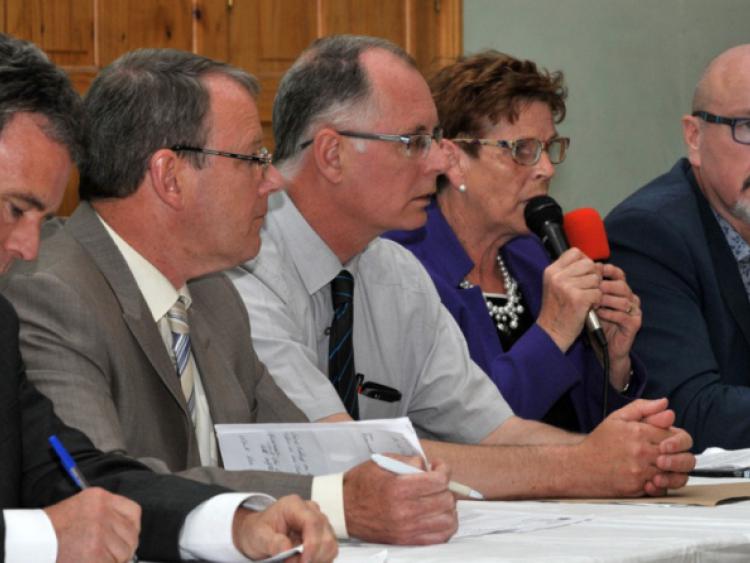 Jacquie Cuddy received a standing ovation, at last week’s public meeting on Portlaoise Hospital, for telling her story of how her life was saved at the hospital following a tragic car accident, which claimed five lives.

Jacquie Cuddy received a standing ovation, at last week’s public meeting on Portlaoise Hospital, for telling her story of how her life was saved at the hospital following a tragic car accident, which claimed five lives.

She said she would not be here to share her story were it not for the actions of the ambulance service and the staff in Portlaoise Accident and Emergency.

“We all hear of the bad stories being published, but we never hear about the good,” an emotional Jacquie told the large crowd in St Mary’s Hall, Portlaoise.

“I was involved in a horrific accident on June 13, 1998 which left me seriously injured and fighting for my life, and which also left the surrounding communities in shock.

“The terrible day of Friday, June 13, 1998 will be the darkest day of my life forever, when a horrible wet night was turned into the most horiffic night of our lives.

She bravely continued: “I woke up two and a half months later, after being in a coma fighting for my life.

“I had only minutes to live but because of the expertise of the ambulance service and and the staff at the accident and emergency department, I would not be here to tell my story,” she said.

Jacquie explained that she was a front seat passenger in the car and ended up “mangled under the dashboard” due to the impact from the collision.

As a result, Jacquie had to be cut out of the wreckage by the fire service,

“The ambulance service fought so hard to keep me alive while this was being carried out.”

The ambulance service stabilised Jacquie on the roadside before rushing her to Portlaoise hospital.

“The A&E staff worked tirelessly to ensure I was stable before I was transferred to Dublin where I underwent emergency brain surgery.

Jacquie concluded: “Even though I do not take any credit from the hospital in Dublin, I really hope you can see how sad and frustrating this situation is now.

“Were it not for Portlaoise A&E, I would not be here to tell my story.”