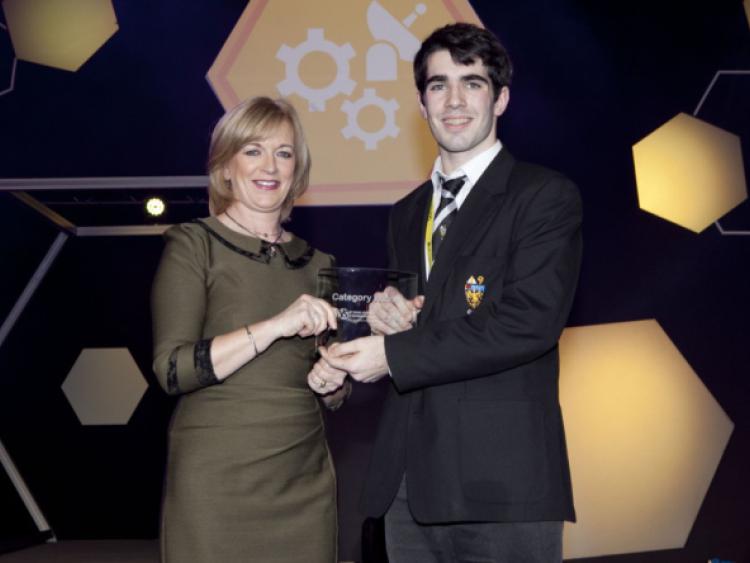 Richard Tynan from Killenard, Portarlington has won on the treble at this year’s BT Young Scientist and Technology Competition.

Richard Tynan from Killenard, Portarlington has won on the treble at this year’s BT Young Scientist and Technology Competition.

He also won the Analog Devices Technology Award, for the student who showed outstanding achievement in technology, winning an all expenses trip to San Francisco, Silicon Valley and to Stanford University.

Richard, a son of Richard and Carmel Tynan, won a third award for the quality of his display.

He had an inkling he was in the running for top prize because of the number of judges around his stand on the last day.

“And my report book went missing during the night, we thought it was lost, but the judges were having a second look,” he said.

It is his third year to enter the event and win awards, and he was thrilled to win again.

“I was shaking coming back down. I am over the moon, and looking forward to heading to Silicon Valley with Analog Devices,” he said.

He has already been offered a course in computer science with physics at Cambridge University, dependent on his leaving cert results.

Richard is a past pupil of Killenard NS.

In the Primary Science Fair, Scoil Mhuire Fatima, Timahoe won an award for ‘Excellence in application of investigative science’ on their wind turbine project.

The overall winner was Paul Clarke from Raheny, for his project ‘Contributions to cyclic graph theory’, presented by Minister Ruairí Quinn.