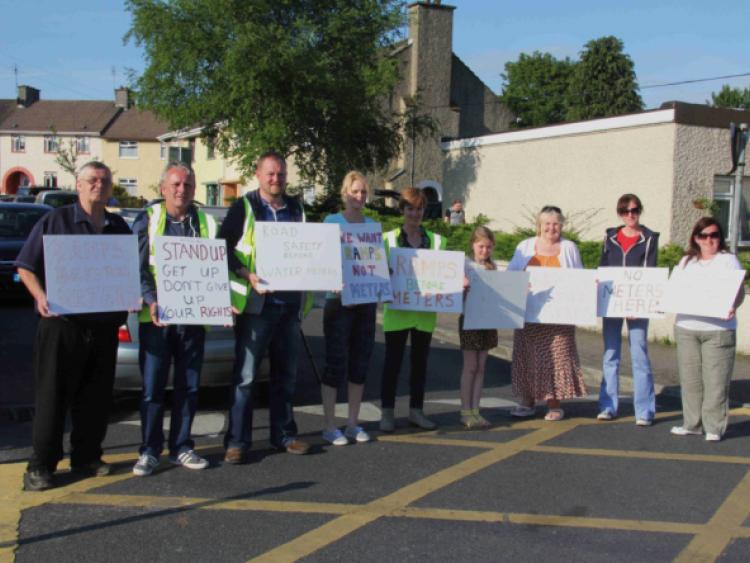 Recent election candidate Stephen Greene who is campaigning to make housing estates safer for children to play, has led a vigil against water meter installation.

Recent election candidate Stephen Greene who is campaigning to make housing estates safer for children to play, has led a vigil against water meter installation.

“Not if it was holy water coming out of the tap would I pay,” he told the Leinster Express last Thursday.

Mr Greene, whose daughter Maria was fatally knocked down as she played outside her house in March, is angry that his requests for speed ramps have not yet been met.

“Road safety should come before meters. What’s happening now is greed. They are forcing this on people and we are having none of it,” he said.

He says the standoff between residents of St Brigid’s Place, and Irish Water workers, began on Monday morning May 26.

“The vans were sitting in the carpark of the leisure centre. Eventually they went off but they come back around the estate every now and then,” said Mr Greene, who with his neighbours is remaining outside holding signs with slogans such as ‘ramps before meters’.

He claims gardaí have been driving around the estate much more than usual. He has no plan to stand down.

“I have all the time in the world. We are just exercising our rights, these things are being imposed on us. I asked them for a contract, there is none. I want to see terms and conditions,” he said.

Stephen Greene ran for election in the Portlaoise Abbeyleix area, on the stance of road safety for children and gainied 708 votes.

Laois County Council are conducting a safety audit in an area of Portlaoise including St Brigid’s in Portlaoise. No decisions have yet been announced.