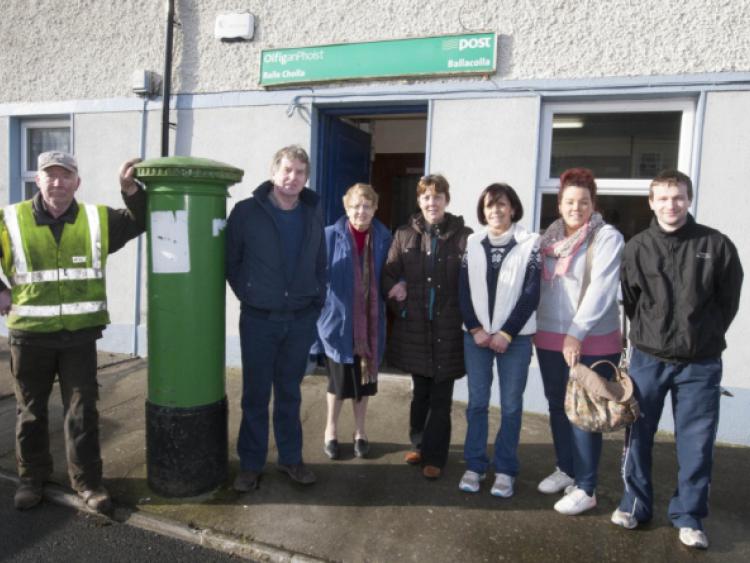 Locals in Ballacolla were last week coming to terms with the closure of Ballacolla Post Office last Friday.

Locals in Ballacolla were last week coming to terms with the closure of Ballacolla Post Office last Friday.

People in the area were only informed on Monday of last week, just after the local election count finished.

Local man Michael G Phelan, who had been campaigning for a number of months to keep the post office open, said that he was disgusted with the news.

“I fought hard to keep the post office on track. We went up to Dublin to meet representatives from An Post and they wouldn’t give us a straight answer then. It is absolutely devastating news, and it is fairly annoying to see the post office closing this week of all weeks.”

Mr Phelan said that now people will have to travel for their post office services for the time being.

“They are expecting people to go to Durrow until they make their own provisions. There were a large number of submissions to take over the post office, and there were a few very, very genuine people after it. There were a couple of people who have already run their own businesses. It is terribly disappointing that An Post didn’t give it a try. They wouldn’t even give the opportunity.”

He added that other businesses in the village will soon feel the effects of the closure.

“It will close the shop across the road. Minister Shatter last year closed the Garda barracks. They are closing the post office for the sake of closing it. The post-mistress, who is retiring, was willing to rent the premises as well. An Post are now depriving somebody of a job. I’m absolutely disgusted with it. It is funny that it is only coming now, telling us after the weekend’s election. It would have been a factor in Ballacolla.”

Mr Phelan said that a number of locals had already been in touch with him over the matter, stating that “people are sickened” with the closure.

“It will be the same as Shanahoe now, there will be no welcome for anyone at the post office door. It is nearly two months since we were in Dublin to meet An Post, and they told us they would have a decision in two weeks. We gave it as much as we could. There is going to be nothing left in the countryside.”