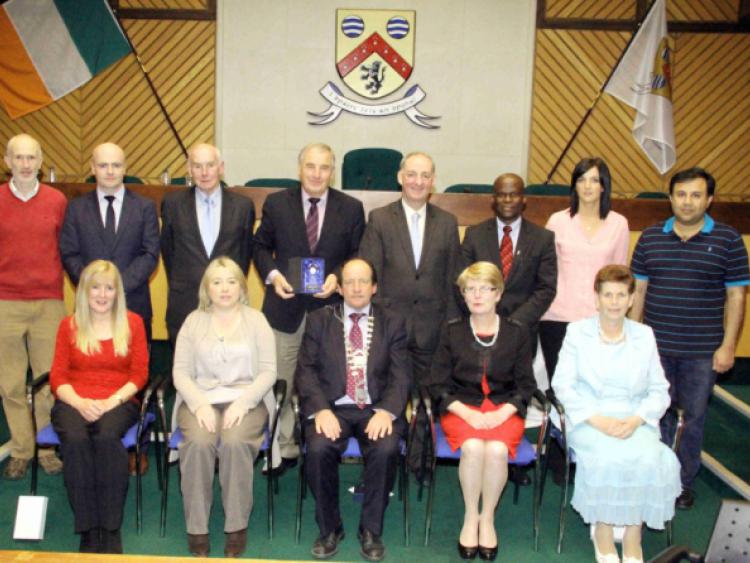 60 years after the establishment of town commissions, Portlaoise’s illustrious history of local government came to an emotional end at County Hall last week, with the last ever meeting of Portlaoise Town Council.

60 years after the establishment of town commissions, Portlaoise’s illustrious history of local government came to an emotional end at County Hall last week, with the last ever meeting of Portlaoise Town Council.

Councillors from Fine Gael, Fine Fail, Sinn Fein and Independents were in attendance, for what was described by Cllr Kathleen O’Brien as a sad day for Portlaoise as people were losing “the local voice”.

Also expressing sadness at the end of the council was Cllr Catherine Fitzgerald, who remarked that the town council had always served its purpose.

Cllr Willie Aird, the last ever cathaoirleach, said it would be very difficult in the future for young people interested in politics to get a start without local government, with the abolition of town councils ahead of the forthcoming local government reform.

Praising his fellow councillors, Cllr Aird said that many past members had passed away while still serving, which illustrated just how much people enjoy the work. He pointed out that the likes of Cllr Jerry Lodge had devoted 45 years to the council and wryly remarked: “If it was the public sector he would be retired twice by now.”

Cllr Aird also criticised the decision to abolish town councils, saying: “The people who have taken away democracy have no idea about putting your name on the ballot paper.”

Cllr Aird thanked the county manager and the town manager, the town clerk, Ms Pamela Tynan, and all past and present council staff.

Cllr Jacob, who was council chairman in 2008/09, spoke of some of the things he had achieved, such as spearheading a campaign to get the State to take in charge Emo Court.

“Emo Court is the jewel in the crown of our county,” he enthused, adding that he did not think he had acquired any enemies during the “ups and downs” of his years’ service.

He wished all the candidates every success in the forthcoming elections, saying: “It’s a hard job.”

Cllr Rotimi Adebari said the council was “the closest layer of government to the people” and it had been a great honour to serve. Thanking his fellow councillors for supporting him when he joined without any experience in 2004, Cllr Adebari evoked a sense of family by saying: “Kathleen (O’Brien) has been my mother on the town council... Jerry (Lodge) has been a father to me; or maybe a grandfather.”

Cllr Matthew Keegan remarked that being a councillor “had nothing to do with expenses”, it was all about “the privilege and the prestige” of serving, while Cllr Claire Spollen, who took the last ever Sinn Fein seat on the council, remarked that the amount of work town councillors did was “unbelievable”.

Cllr Caroline Dwane said that, despite the “very limited powers” of the council, she had personally been able to raise issues over unfinished estates and derelict sites in the town.

Also present at the meeting was county manager, Peter Carey, who said it was a poignant moment.

Declaring it a great honour to be there, Mr Peter Carey described the town council as “a microcosm” of what happens at a local level, with councillors always having “their finger on the pulse”.

He said that many people started off in politics at a local level, before going on to the county council and sometimes the Oireachtas.

Town manager Michael Rainey said he had seen a number of projects delivered on the ground through the councillors’ work, while area engineer Tom O’Carroll remarked that footpaths in Portlaoise had been greatly improved through their efforts.