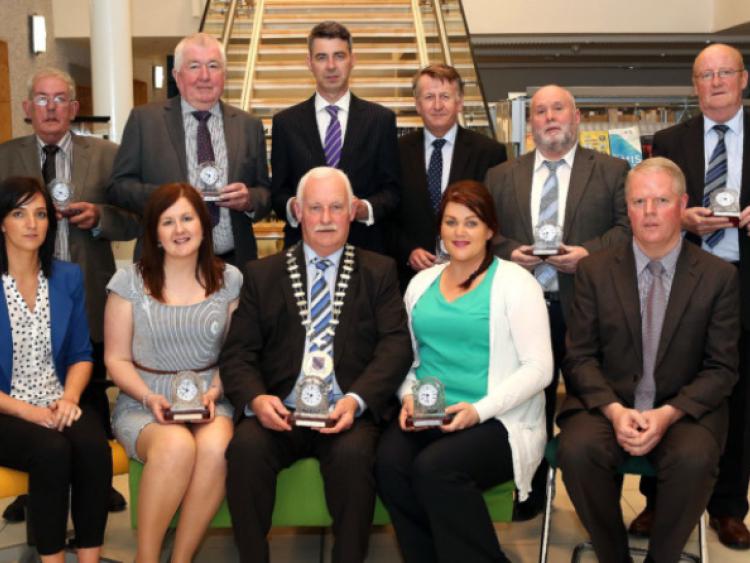 “POIGNANT” was the word Cllr Rosemary Whelan used to describe the occasion, and indeed it was as the flags fronting Mountmellick Courthouse were lowered last Thursday to mark the demise of the Town Council after 156 years.

“POIGNANT” was the word Cllr Rosemary Whelan used to describe the occasion, and indeed it was as the flags fronting Mountmellick Courthouse were lowered last Thursday to mark the demise of the Town Council after 156 years.

As Cllrs Denis O’Mara and Ollie Payne noted, Environment Minister Phil Hogan has wiped out the Council, and its counterparts elsewhere, “with a stroke of a pen” as part of local government “reform.”

Tbe sun was sinking and a lament was relayed through a loudspeaker as Post 27 United Nations veterans lowered the tricolour and the Mountmellick Town Council flag. Flowers bloomed in window boxes on the Courthouse, like wreathes at the  Council’s funeral.

The Great Famine wasn’t long past when Mountmellick Town Commission, as it then was, was established in 1858. Its first Chairman was Major Richard Warburton, a member of the ascendancy.

Declan Byrne is currently researching the Town Council’s history, but, apparently, early records and documents have been lost. Appropriately, he is a former Mountmellick Town Manager and served many years as a local  authority official.

Cllr Marc Connolly said using austerity as an excuse for disbanding the Town Council was the “biggest joke of all.”

The Council, he pointed out, had survived the Land Wars, the War of Independence, the Civil War, the Economic War, the First World War and the Second World War. He claimed: “It was the local authorities that really gave this country  its independence.”

John Moloney, who reached high office as a Minister of State, was the third generation of his family to serve on the Council. He succeeded his father and grandfather, John and Michael Moloney,  respectively.

First elected in 1985, Michael Gormley is the senior member of the Council which officially closes on June 1. He described himself as “the oldest swinger in town.”

Many ex-Councillors were at Thursday evening’s ceremony, including Eamonn Hughes and Brian Lynch who held their seats in the late 1950s/early ‘60s. Brian’s son Stephen is, of course, a current Councillor.

Other families also have strong connections with the Council. Brothers Ollie and P J Payne have served on it, as have Ger Doody and his niece Rosemary Whelan and Ger Dunne and his mother Molly.

Mountmellick’s most renowned Town Clerk was probably Peg Williams. “When she was around the Chairman didn’t have the power,” recalled Charles Flanagan, smiling.

Michael Gormley reminisced: “The meetings took place in Peg Williams’ office and there was always a little bottle there. I will not say what was in the bottle.”

Parade Marshal at the flag-lowering ceremony was Jimmy Shiels. Michael Thompson, a Mountmellick man, handed the flags to Town Council Chairman Paddy Bracken. Charles Mott, also of Post 27, presided. He said it was an honour to be present. Proceedings ended with the playing of the national anthem.

The evening ended with a reception in the library. MC was Town Clerk Pamela Tynan. Rector Rev Ruth Noble recited an opening prayer and  speeches followed.

Stated Paddy Bracken: “We had great times, great days and great nights. It is sad for us to be the last Town Councillor. It is sad for me to be the last Cathaoirleach.” He thanked all the staff who had helped members over the years and paid tribute to Pat Bowe and other  deceased colleagues.

Charles Flanagan described the Town Council’s demise as a “momentous occasion.” He acknowleded the great contribution members had made to the economic, social and cultural life of Mountmellick.

Michael Gormley told the gathering: “It is with deep regret that we are here tonight to mark the dissolution of Moutmellick Town Council--the removal of a pillar of our community, the loss of a voice  for local people.”

John Moloney fondly recalled his time on the Town Council and congratulated Charles Flanagan on his elevation to high office.

County Manager Peter Carey, after paying tribute to the Town Council, promised: “Mountmellick is not going to be a forgotten town. I will  make sure of that.”

Town Manager Ian McCormack said it had been a huge honour for him to serve in Mountmellick--an unbelieveable and very rewarding experience. Parish Priest Fr Michael Murphy recited the closing prayer.