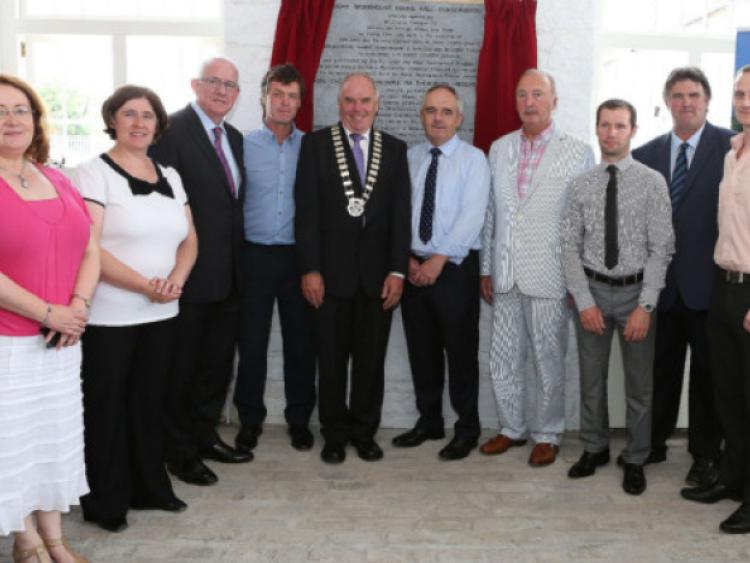 Lunch was served in Donaghmore workhouse last Friday July 25, after the restored kitchen and dining hall were formally opened by Minister for Justice Charlie Flanagan.

Lunch was served in Donaghmore workhouse last Friday July 25, after the restored kitchen and dining hall were formally opened by Minister for Justice Charlie Flanagan.

The fine spread was in stark contrast to the food eaten in the same room by the destitute inmates 150 years ago.

“It looks a bit plush to what the inmates were used to,” noted Trevor Stanley, museum committee secretary.

He pointed out that the kitchen windows were placed high, so that females working there could not catch a glimpse of their husbands or children. Once families entered, they were segregated.

The post-famine workhouse opened in 1853. At its busiest it housed 400 men, women and children in six huge dormitories. Many are buried in a field at the back, marked with one gravestone.

Later it became an English barracks, and then Donaghmore farmers co-op. A volunteer committee run an agricultural museum and famine museum on the site, and will use the kitchen as the museum reception, with original record books on display.

Minister Flanagan discarded his script in favour of a shorter off the cuff speech because of the hot day, quipping “it’s a long time since somebody died in here”.

“This dining hall is a grim reminder of our past, the dark days of the 19th century. Turn the clock forward, and we don’t have famine and deprivation to the same extent, but my department contribute €600million yearly on your behalf around the world, to do what should have been done in this country,” he said.

He hopes tourists will visit

“We have 70 million Irish diaspora, what better place for them to visit,” he said.

The kitchen and dining hall were bought from Glanbia by Laois County Council who invested €250,000, which added to €500,000 from Laois Partnership, $10k from the Dept of Arts and €30k from the Donaghmore committee, paid for the restoration. Four stone dorms await restoration. www.donaghmore museum.com