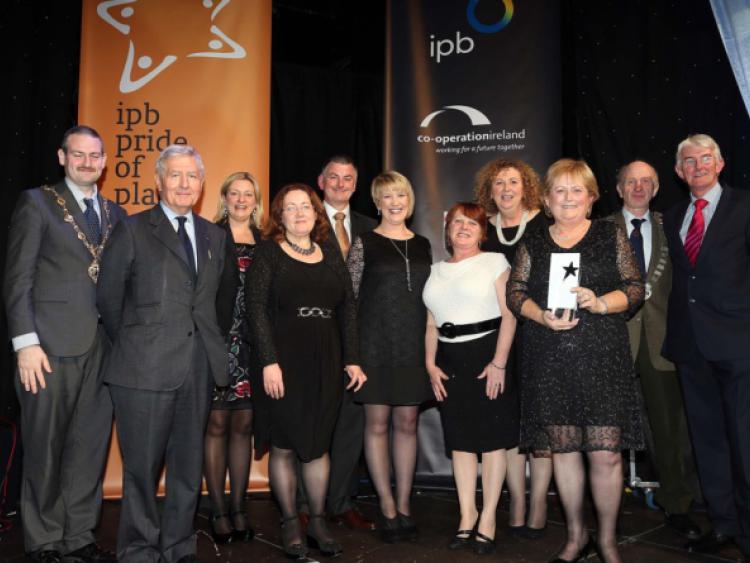 The town of Portarlington took a top runner up award in the Annual IPB All-Island Pride of Place Awards announced at the gala ceremony in The Venue, Derry on Saturday, November 16.

The town of Portarlington took a top runner up award in the Annual IPB All-Island Pride of Place Awards announced at the gala ceremony in The Venue, Derry on Saturday, November 16.

Portarlington received the accolade in Category 5, which is for populations of over 2,000 people.

Portarlington locals Margaret Guijt-Lawlor, Ann Dunne and Rita Behan were delighted to accept the runner-up prize on behalf of their local community. All in the area worked extremely hard to present their town in all its glory last July, displaying to the judges how despite the recent challenges of a much increased population and the issues that come with recessionary times, the people of Portarlington love their town and are working together to overcome these challenges.

They are doing this with community based initiatives in education and training, caring for their older citizens, integrated town plans and the work of the community to develop the town and its amenities, while also promoting local entrepreneurship and support for local business.

Above all, the people of Portarlington displayed their incredible spirit of volunteerism which has grown in the town in recent years.

Portarlington was one of three entries that represented Laois in this year’s Pride of Place Competition – Knockmay in Portlaoise competed in the Housing Estates Category and South East Laois Arts Network competed in a Single Issue Category entitled Community Arts.

Leas Cathaoirleach of Laois County Council, Cllr Martin Phelan, who attended the Awards in Derry, congratulated all the Laois entrants on their hard work in representing their county and their local communities so well. He praised the commitment of those who prepared for and took part on the judging days.

Director of Services, Anna Marie Delaney said that Laois County Council is delighted to be associated with such positive measures being taken by communities.