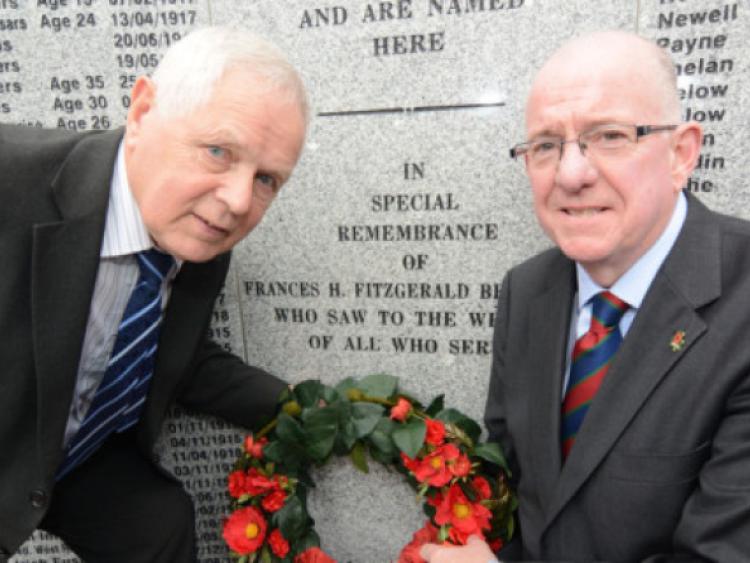 A photograph and a document symbolized the terrible reality of World War I at a ceremony in Mountmellick on Sunday.

A photograph and a document symbolized the terrible reality of World War I at a ceremony in Mountmellick on Sunday.

In the photo was John Phelan, in the uniform of a private of the 2nd Battalion of the Leicestershire Regiment. His service number was 3081.

The document, dated June 10, 1916, was from the military authorities and was addressed to Mrs John Phelan, Harbour St, Mountmellick. It informed her that her son John had been killed in action on May 30 of that year and conveyed condolences.

John Phelan, aged 29, is buried in Flanders. He was one of 100 men from Mountmellick and the surrounding area who never returned home from the slaughter of the Western Front and other battle zones.

Angela Lammond (nee Phelan), his niece, said the photograph and document were family treasures, taking pride of place on a mantlepiece for many years.

With her at the ceremony were her brothers Rody and Jim Phelan, sister Louise Donovan and husband John Lammond. The Phelans were reared at Clonterry Lane in Mountmellick. Now, after a lapse of almost a century, Mountmellick has, so to speak, welcomed home the 600 local men who served in The Great War of 1914-1918.

On Sunday, in the presence of a large attendance, the Minister for Foreign Affairs Charles Flanagan unveiled a memorial to them at The Courthouse/Civic Offices. Interestingly, just up the street, is the monument to the 1798 rebels.

The memorial plaque commemorates all the men from the greater Mountmellick area who served in World War One, particularly those who gave their lives. And it includes the name of one woman, Frances Fitzgerald Beale OBE, who was an advocate for ex-soldiers and their dependants.

Three bands, descendants of Great War soldiers, representatives of the Defence Forces, Post 27 UN veterans, public representatives and clergy were among those at the ceremony.