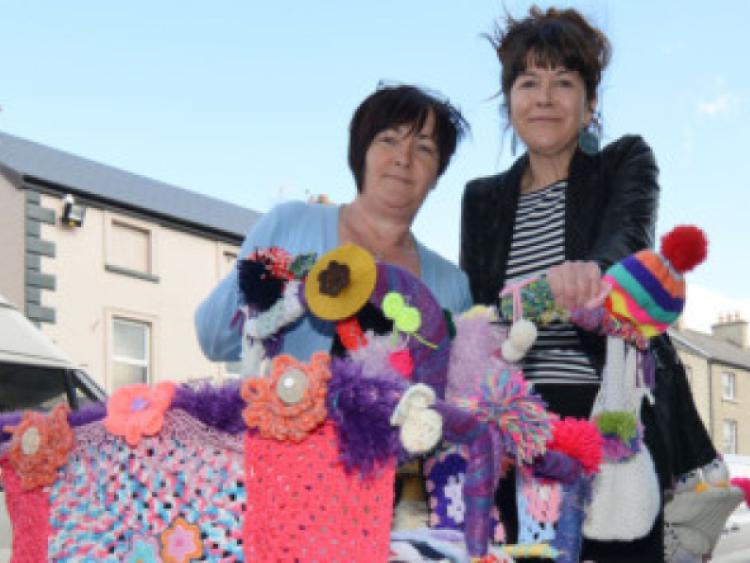 They came under cover of darkness at 6am on Saturday August 23, armed with knitted and crocheted artworks, scissors and cable ties.

They came under cover of darkness at 6am on Saturday August 23, armed with knitted and crocheted artworks, scissors and cable ties.

Dozens of Mountmellick crafters silently ‘bombed’ the town in colour as dawn broke, to the bemusement of passers by.

By the time traders opened their doors, the town was a riot of colour, with bicycles, railings and trees covered in woolly art.

Even a giant ice cream cone got “bombed” at O’Horain’s shop, while Philip’s bakery shop now has knitted monkeys enjoying a tea party in their window.

The “yarn bombing” was first suggested last June by local businesswoman Nina Horan, who describes it as “a moment of fleeting beauty”.

“It’s a form of temporary street art, putting Mountmellick on the map, in a positive light. Everybody came on board. We had about 45 people at our first meeting,” she said.

Mountmellick’s strong history in textiles had a part to play she believes.

“That respect for craft was already there, we just put a modern twist on it,” she said

Crafters of all ages quickly got busy knitting, stitching, crocheting and making pompoms, meeting weekly to plan their attack and exchange craft lessons.

“Everybody supplied their own yarn, and we got donations of yarn and pieces from a Mullingar bombing. We recycled old clothes and cds too.”

St Vincent’s hospital even had their garden “bombed”, while knitted door wreaths have become a new fashion.

The reaction has been all positive Nina said, both from local groups such as Tidy Towns, and from visitors.

“We have had great positive feedback. People driving through the town are stopping to take pictures,” she said.

The work will soon disappear as quickly as it appeared, but there is more to come, with weekly meetings throughout the winter.

“Everybody wants to keep it going, it’s great for kids, and great social outlet,” said Nina.