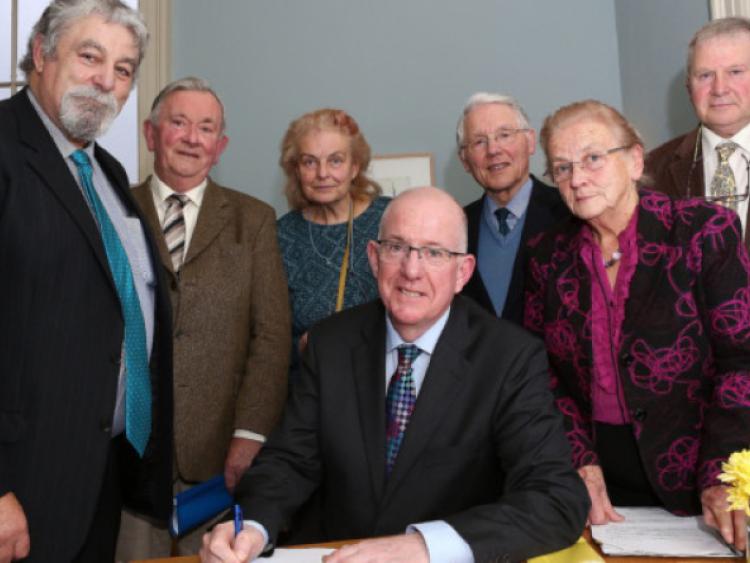 Plans are underway to display the Irish Draught Horse at Emo Court, in an effort to prevent the breed from becoming extinct.

Plans are underway to display the Irish Draught Horse at Emo Court, in an effort to prevent the breed from becoming extinct.

Minister for Foreign Affairs and Trade, Charlie Flanagan was at Emo Court recently to receive a proposal from the Irish Draught Horse Breeders Association which was drawn up with collaboration from Eileen Brennan, Michael O’Connor, Andrew Cole, John Kennedy and Kevin Croke.

In the early 2000’s a working group was set up to draw up a proposal to have an Irish Draught Horse presence at Emo Court. However, the number of horses boomed during the celtic tiger and there was little need for such a project.

Now the breeding returns for pure Irish Draught Horses have reached a critical point for the breed’s survival with foal registrations likely to dip below 300 this year - from a height of 1,250.

It is proposed that two or three Irish Draught mares be put on display. Ideally these mares would have foals at foot during the summer months.

An information board with information about the breed and its history, with accompanying photos, could be placed outside the horses paddock.

The committee have already approached and reached an agreement with a breeder who is convenient to Emo Court to provide a minimum of two mares suitable for this project.

The committee do not envisage any major costs to Emo Court. They have estimated costs of approximately €5,000 in the first year to include the erection of a field shelter for the horses, fencing to create a riparian band for health and safety.

Thereafter a sum of €2,000 is estimated to cover all, if any, eventualities.

The local branch of the Draught Horse breeders Association hope to have a finalised agreement in principle by the end of the year, with the final location and layout worked out by the end of March next year. It is hoped to move in dry mares or a mare and foal by spring of 2016.

Minister Flanagan said the proposal had received a positive repsonse from the OPW.

“The proposal has received a positive response from the Office of Public Works.

“Currently a small piece of ground that might be appropriate is being assessed.

“I would like to reiterate support for this worthwhile project, one that I hope to see come in fruition at the very earliest opportunity.”

On behalf of the draught breeders, Kevin Croke said: “The Minister’s interest and support giving a new energy to this project and a new focus, sincerely thank you.

“It is a part of our heritage we cannot afford to let it go and it’s on the brink again.”