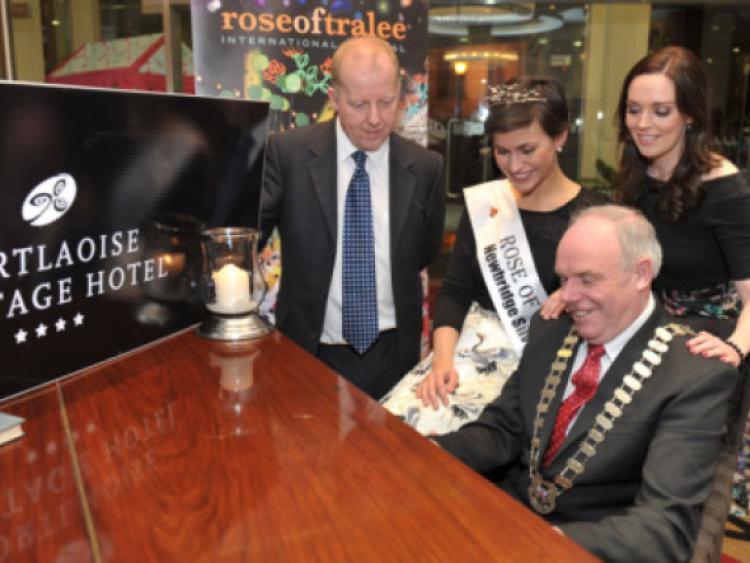 “It’s nice to return to the scene of the crime,” Rose of Tralee Maria Walsh joked in Portlaoise last week, back to launch the 2015 Laois Rose search.

“It’s nice to return to the scene of the crime,” Rose of Tralee Maria Walsh joked in Portlaoise last week, back to launch the 2015 Laois Rose search.

The Philadelphia Rose recalled coming to Laois for the Regional finals.

“The great thing was meeting the 59 other roses, we got to go to schools, and meet and greet as many as we could, it was fantastic. I grew up in Mayo, but I met a lot of other American roses who had never been to Ireland, so I was able to watch it through their eyes, and embrace this great country. The Laois Rose Teresa is fantastic, she brought us out to Barrowhouse where she grew up, so while I couldn’t get back to Mayo I was able to experience that great community spirit small villages have. I never dreamed I would come back as the International Rose, wearing the crown and sash,” the 27 year old studio manager told the Leinster Express.

Maria is the first gay Rose of Tralee. Her announcement days after she won the competition has only helped it, said organiser Stephen Cronly.

“It’s good to bring the Rose into the 21st century, we have criteria but sexual orientation is not one of them, the profile is even higher now,” he said.

Maria’s Laois visit kicked off with the launch of the 2015 Laois Rose search in the Heritage Hotel on Tuesday evening, along with the current Laois Rose Teresa Brennan, later meeting locals in the Sally Gardens pub.

While snow caused some delays on Wednesday morning, she managed to pack in plenty to her quick Laois visit.

“We have snow right now in Philly so I’m delighted to miss that, because we get a couple of feet. Here it’s a little more dangerous as we’re not used to it, so we’re taking it nice and handy,” said the Rose, who has a long commute weekly to Philadephia.

“Some Roses do take a year off work and some don’t, what’s so great about the Rose of Tralee is they embrace the Rose and let her make her own year, so I’ve been racking up the air miles. The launch to find my replacement has kicked off so I am heading around all 32 counties over the next two weeks,” Maria said.

She first visited Laois Shopping Centre, then it was on to Kolbe Special School, where principal Orlagh Mahon presented her with a canvas featuring 29 paper red roses and handprints, representing each student.

“Thank you for the welcome, I know it is no easy task as you are very busy. I have received many lovely gifts but this is by far the nicest, thank you,” Maria told students and staff.

Among the children she spent time with was Harry Hoare aged 6 from Rathdowney, grinning from ear to ear after meeting her.

“We were coming today, bad roads or not, it is lovely to have a celebrity visit the school,” said his proud mother Angela.

There was another warm reception in Ballard Lodge Nursing Home, where Maria met manager Angela Duggan, residents and staff, and was presented with a handmade poster and chocolates, before zipping off to Kilkenny.

“We were pleased to welcome Maria back to the county. We are extremely proud of Teresa for representing Laois so well in the dome and throughout the year, the search for her replacement begins now, and I hope there is lots of interest,” said Bernadette.

Closing date to enter the Laois Rose is April 1. See www.RoseofTralee.ie or call 066-7121322. The regional festival in Portlaoise runs from May 28 to 30, with the final in Tralee in August.