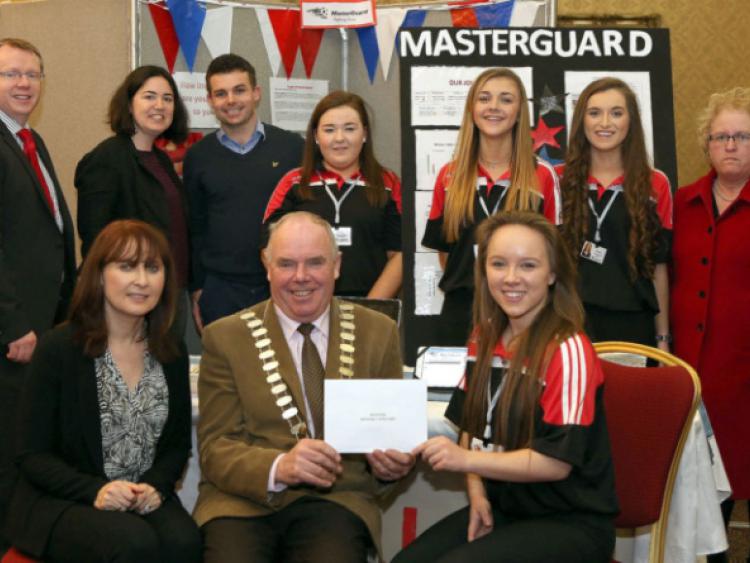 Four business savvy girls from Scoil Chríost Rí have been chosen to represent Laois at the national Student Enterprise Awards next month in Croke Park, with their product ‘Masterguard’.

Four business savvy girls from Scoil Chríost Rí have been chosen to represent Laois at the national Student Enterprise Awards next month in Croke Park, with their product ‘Masterguard’.

All the students had to set up and run their businesses.

The Portlaoise girls are keen sports players who saw a need for an affordable, comfortable mouthguard.

“With ordinary mouthguards you can’t talk and it causes gagging, it was a problem for which we all wanted a solution,” explained Elaine.

Research brought them to Athlone manufacturer APT who has undertaken to create their prototype, a modified neater version of a standard guard.

The girls plan a trip to Yorkshire to buy a machine to manufacture their guard, so they can launch it in May.

They raised the €1,500 cost by holding Christmas fairs and washing teachers’ cars, and were thrilled to get the €500 first prize, which will pay for their UK trip.

“We are delighted, we did so much work and it is all worthwhile now,” said Alice.

Second prize of €400 went to game creator Daragh Carroll, St Fergal’s College Rathdowney, for his fantasy computer game ‘Tomes of Ammorang’, set in a mythical world where a wizard is trying to thwart great evil.

Daragh began programming at the age of ten.

“I decided to strike out as a solo project, but I got a lot of help from a programmer in MIT. St Fergal’s have been hugely supportive, especially Ms Phelan for her advice on the business side of things” said Daragh, who plans to release his game online in July.

In third prize winning €300 was Tessa Raftery, a TY student from Mountrath CS, with her established facepainting business ‘Fun Faces’.

“I am delighted, I’ve put a lot of work into learning techniques and balloon modelling, we started a year ago and it’s going well,” Tessa said.

Vojtech Dzudza, one of the ‘Music in Class’ group from Portlaoise College, began the event with a Sam Smith song.

Also in the final were St Mary’s CBS, Heywood CS and Coláiste Iosagáin.

“We had 292 active participants this year, whittled down to 108 for the final. We are delighted with the uptake, it all goes back to the teachers,” said Celine Ryan, co-ordinator.

“The students get better every year. This shows them there is an alternative to a 9-5. Self employment is a viable career option,” said Evelyn Reddin, Laois Enterprise Board.