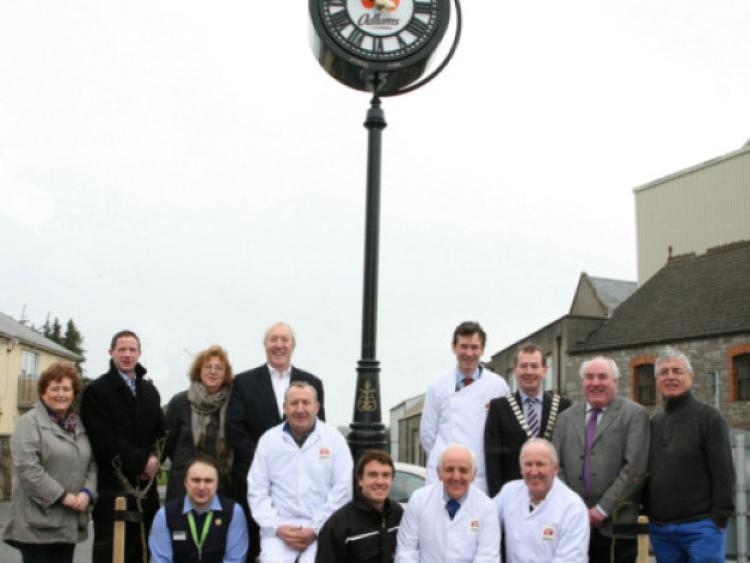 Rail users in Portarlington will have no excuse to be late for their train, now that a shiny new revolving clock has been erected on the nearby roundabout.

Rail users in Portarlington will have no excuse to be late for their train, now that a shiny new revolving clock has been erected on the nearby roundabout.

The eyecatching clock is the centrepiece of the roundabout at Odlums Mill, and was sponsored by the company. Completed in a traditional wrought iron style, the clock features the famous Odlums owl logo on its face, and is complimented by attractive new landscaping, sponsored by Lidl.

The project is a result of ongoing work by the Dirty Old Towns committee, who have continued to steadily improve aspects of Portarlington since the RTE programme ended on a high a year ago.

‘Dirty Old Towns?’ was fronted by celebrity garden designer Diarmuid Gavin, who inspired communities to do makeovers of their areas, and featured Portarlington in a starring role.

Ann Dunne, Chairperson of the DOT committee explains that not all of the projects they had planned could be completed within the time frame of the series.

“We wanted to show the people of Portarlington that its wasn’t all about the rolling cameras but the genuine attempt to reinvigorate the town and restore pride,” she said.

The committee intend to transform all three main roundabouts on Port’s approach roads,

Matt Dunne was project leader for the ‘clock roundabout’ at the junction of the station road and canal road.

“I succeeded in convincing Odlums to sponsor a magnificent clock which was designed and commissioned by Stokes Clock Manufacturers in Cork. As the clock required electricity a road opening licence was required and Mr Liam Donoghue, a groundswork contractor was engaged. All the work was completed within 24 hours with minimum inconvenience to traffic and local businesses,” he said.

“Sean Brophy was the stone mason and John Carey did a marvellous job landscaping. Lidl have agreed to sponsor the landscaping of all three roundabouts. So the next time you are in Port make sure and check out the clock, its really something else,” he said.