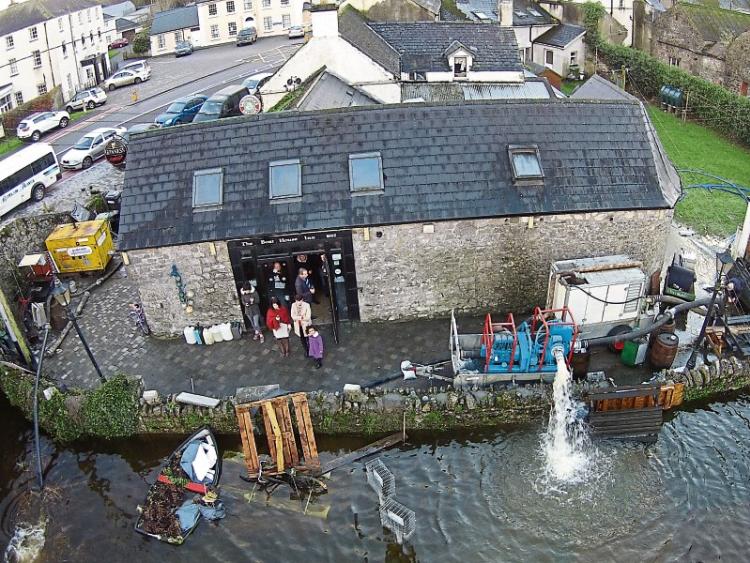 A well-known Durrow publican, who claims Christmas floods cost him up to €8,000, is prepared to put up with a lot less compensation than received if action is taken to prevent a repeat.

Bob Campion runs the popular Bob's Bar in Durrow. He was the victim of a serious flooding incident over Christmas caused by Storm Frank. The publican spoke at a meeting in Durrow last week.

“I sat for five nights 24/7 pumping water out of the pub. If I hadn't pumped it out we would have had three foot of water in the pub. It was because friends and neighbours and nobody else (that we managed) to stop the flooding,” he said.

Mr Campion said a pump provided by a friend was not up to the job, but he then contacted Laois Fire Service but their equipment did not work, so he ended up hiring several industrial pumps to save his pub. Over six days he said he battled the flooding with the invaluable help of local people, without any representation from Laois County Council other than the Fire Service.

He estimates that the pumps and fuel cost €5,000. But he also claims that earnings were lost over the busy Christmas period.

Mr Campion tried to claim off his insurance but they refused because he managed to keep out the water.

“I was penalised for six days keeping out the flood,” he said.

Mr Campion then applied to the Red Cross fund set up the compensate businesses that were hit.

Up until last Wednesday night's meeting he had heard nothing from the council. The following day €2,500 was lodged to his account.

He estimates that this payment covered a fraction of the €8,000 in costs and lost revenue and redecoration costs.

However, he is prepared to put up with the loss if work is done to clear the Erkina River which flows beside his premises and caused the flooding.

“It is not rocket science, the river is blocked. The water can't get through. Dredge the rivers, cut back the trees,” he said.

Mr Campion extended a huge thanks to all of the people who helped him around the clock over Christmas and pledged to hold a night to thank all who helped out in his pub later this year.

The publican was one of many who spoke at last week's meeting in The Castle Arms Hotel which was attended by local politicians.

Many told of their frustration with the red tape which the blame for flooding houses, business and land.