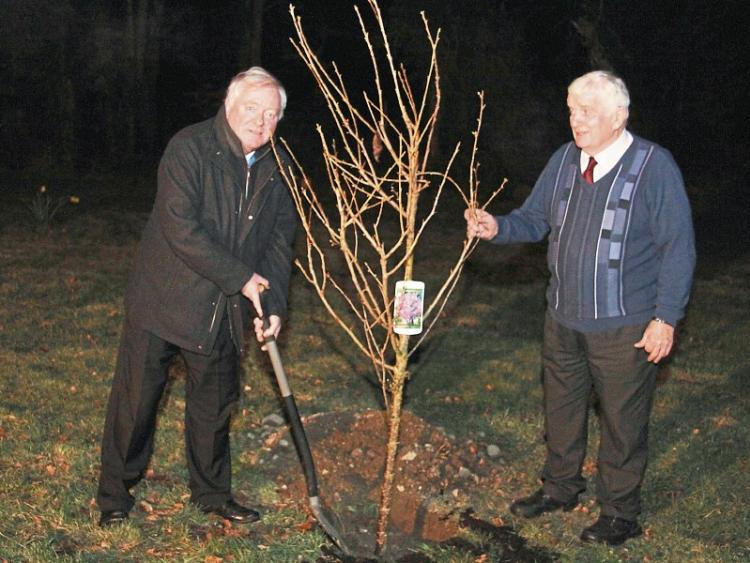 THE Easter Rising, the Battle of the Somme—and the construction of The Heath Hall. A momentous and tragic year was 1916.

It was on St Patrick’s night 100 years ago that the people of The Heath celebrated the official opening of their new parish hall.

And last week, St Patrick’s night 2016, they marked the centenary of that event with the unveiling of a plaque, the planting of a tree and with music, song and dance and ample refreshments.

Seemingly, the hall hosted its first dance on Easter Sunday 1916, the eve of the Rising. Staying with the rebellious theme, local historian Jackie Hyland reports that the Black and Tans arrested five IRA men at a dance in the hall in 1920.

He said his grandfather and namesake, Jack Hyland, supplied the sand and gravel for the hall. “I often heard my father (Matt Hyland) talking about drawing stuff,” he added.

Volunteers put up the building—mostly members of the National Volunteers and the GAA, according to Jackie.

Then parish priest Mons Michael J Murphy—he held the job until his death in 1941—donated the site for the hall. Local resident Michael Kelly said he’d heard the site had been chosen because it was “away from the pubs.”

Be that as it may, another story is told that the nearby Church of the Assumption was built on ground where once a bishop sheltered under a furze bush. The natives, apparently, hadn’t shown him much hospitality.

That accusation couldn’t be levelled against them at the centenary festivities. They warmly welcomed and fed all their guests, particularly parish priest Mons John Byrne and Fr Tom O’Connor.

It was Mons Byrne who unveiled the plaque and planted the cherry tree. Assisted by Bobby Young and others, he performed both tasks under lights.

Incidentally, Bobby’s wife, Catherine (nee Dalton), is the sacristan in The Church of the Assumption. She, as it were, is an emigrant from Portlaoise.

Master of Ceremonies was Paddy Lalor. He commented: “They had a gala concert when they opened this hall in 1916. I’m sure it wasn’t better than what we have here tonight.”

He was among the activists who organized a major refurbishment of the hall in the early 2000s. Contractor Peter Graham did the work.

Mons Byrne quipped: “I was a bit surprised to learn that the hall was 100 years old. It doesn’t look it.”

He added: “This hall is the fruit of great community effort. It stands as a symbol of community spirit and effort. I was happy to be associated with the renovation and extension of the hall in the early 2000s.

“ I hope it will continue to serve the community at the present time and in the future and that people will gather in 200 years’ time to celebrate its bicentenary,” said the Monsignor.