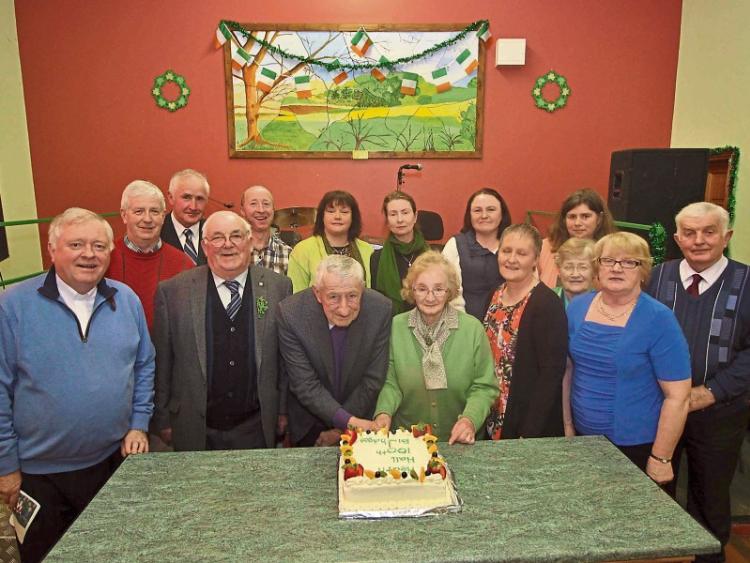 The Heath Hall could tell many a tale—of famous trainer Paddy Dempsey “rubbing down” footballers, of dances, of agricultural classes, of films, of plays, of films, and, of course, of dances.

And of much more.

When the hall was opened on St Patrick’s Night 1916, the then parish priest Mons Michael J Murphy expressed the hope that it would be “a source of innocent enjoyment.”

His successor, Mons John Byrne, in a message for the centenary celebrations, mused: “I’m not so sure that the amusement was always entirely innocent, given some of the stories I hear from the dances of the ‘50s and ‘60s.”

No doubt, many of the dance patrons first got up their courage in local pubs. At the centenary function, incidentally, was Colm Dunne, whose grandfather, Tim Dunne, ran a famous and much-loved Heath hostelry.

In case we should be accused of casting unfair aspersions, let us quickly add that the Pioneer Total Abstinence Association was always strong on The Heath.

As some people at the celebrations remarked, it was a pity that Mick (‘Mockler’) Whelan was no longer with us. He died last year not far short of his 100th birthday. One can only surmise what he could have told about the building of hall.

St Patrick’s Night 1916—from near and far they gathered to celebrate the opening of The Heath Hall. The Leinster Express reported: “Several motor cars were needed for the conveyance of the artistes, and in this connection Fr Kearney had the kind assistance of Messrs Aldritt and Sons, who placed four of their cars at his disposal; and Messrs James Phelan, JP, George N Jessop, JP, and F F Kelly.”

The report went on: “When the time arrived for the formal opening of the Hall, every available inch of space in the building was occupied and many people were crowded out. When Fr Kearney came on the stage to perform the ceremony he was greeted with rounds of applause.”

Performers at the concert included the local school choir, dancers from various areas and Maryborough pianist Mrs Bolger. At the end of the evening, Cllr Denis Booth returned thanks to all.