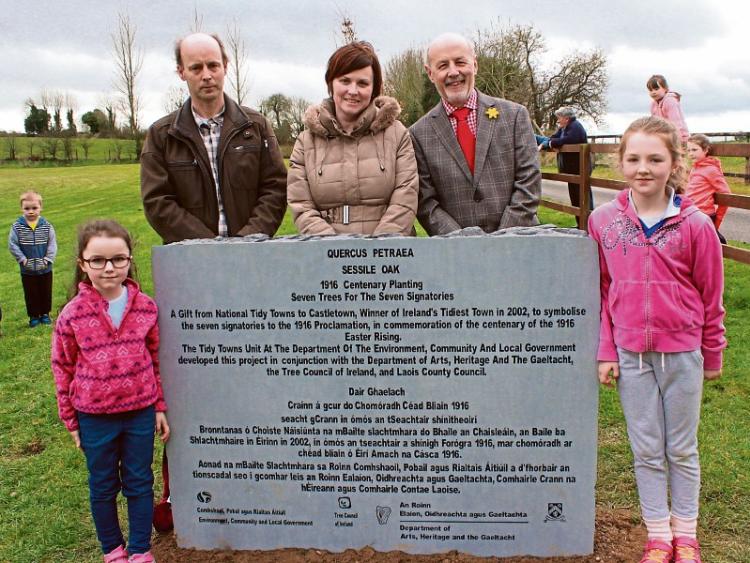 Residents of Castletown gathered on Saturday, March 12th to plant seven oak trees for the seven signatories to the 1916 Proclamation.

The event was organised by Castletown Tidy Towns in association with Churchfield Heights Residents Committee and in conjunction with National Tidy Towns, the Department of the Environment, Community & Local Government, the Department of Arts, Heritage & the Gaeltacht, the Tree Council of Ireland and Laois Co. Council.

As a previous winner of the National Tidy Towns competition in 2002, Castletown was gifted seven native oak trees by the National Tidy Towns Unit of the Department of Environment, Community & Local Government and the Tree Council of Ireland as part of the Ireland 2016 Centenary Programme. All of the villages and towns which have won the overall Tidy Towns award since the competition’s inception in 1958, are being presented with similar trees. The initiative was announced in Laois at the 2015 National Ploughing Championships last September by Alan Kelly, Minister for the Environment, Community and Local Government, and Heather Humphreys, Minister for Arts, Heritage and the Gaeltacht.

Speaking at the event, Ross Doyle, Chairperson of Castletown Tidy Towns said, “These trees recognise the huge contribution Tidy Towns committees have made to towns and villages across the country. They celebrate the spirit of volunteering and community participation which are essential elements in winning Tidy Towns.

As well as serving as a tribute to the past, these seven trees will grow and mature to leave a legacy of benefits for years to come in our community”.

Taking part in the tree planting was Kevin Hutchinson, President of the Tree Council of Ireland alongside various representatives from the Castletown community. A commemorative plaque was unveiled by children from Churchfield Heights.