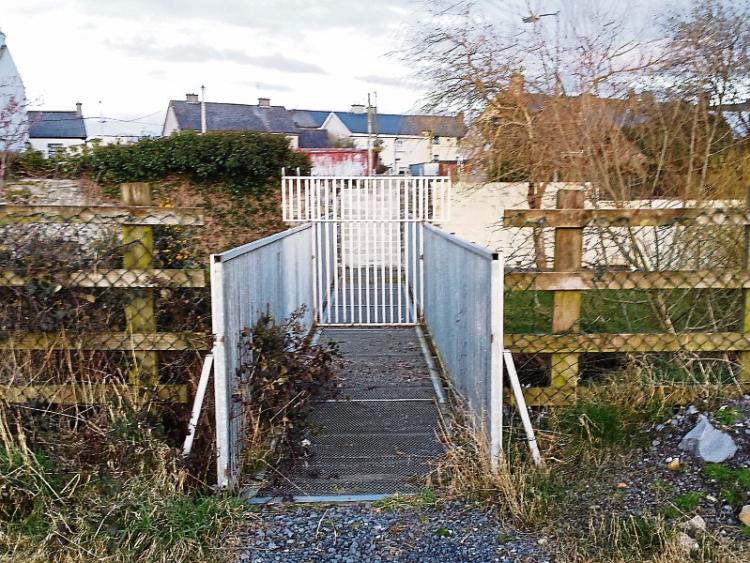 A blocked off metal bridge across the Whitehorse river in Mountrath is encouraging vandalism at St Fintan’s GAA club, who want it to be removed.

The pedestrian bridge leads from a public carpark, which was blocked off by Laois County Council four years ago after repeated vandalism of cars parked there.

However this has not stopped vandals from accessing the carpark, and going across the bridge to St Fintan’s GAA grounds, to cause damage.

Now after spending €300,000 in redeveloping their facilities and clubhouse, the club is asking for the bridge to be removed.

Members are even willing to dismantle the bridge themselves and hand it back to Laois County Council.

“Every time we go down to our grounds, something has been done, a window broken or a door damaged. This is going on for the years. It has come to a head now renovations are nearly complete,” said clubchairman John Carroll.

The footbridge was installed ten years ago as a shortcut to the grounds for players and matchgoers.

“It was a great idea in the first place, people could park in the carpark and then walk along the river. Unfortunately with the anti social behaviour in the carpark, with cars burnt out and broken into, the council blocked up the entrance, but it is still possible to get in,” Mr Carroll said.

The club got permission to install a barrier halfway across the bridge two years ago but the vandals are able to climb over he said.

“It will cost us money to remove it but we want it taken down, we will hand it back to the council, it’s their bridge, I believe it can be reused,” the club chairman said.

Cllr James Kelly submitted a motion to Laois County Council to remove the bridge at the recent March meeting of Borris-in-Ossory Mountmellick.

The reply was “Laois County Council will determine the origins and current use of the bridge with a view to having the matter considered further”.

Cllr Kelly dubbed it “a bridge to nowhere'.

“The bridge is in perfect condition and would serve a more useful purpose elsewhere in the Western area,” said, while doubtful the council can remove it quickly.

“Resources are thin on the ground, they just don’t have the staff. The GAA club have some building contractors as members who say they will remove the bridge no problem if given the all clear by the council. The bridge is of no benefit at all. There have been a lot of windows broken in the new clubhouse, we shouldn’t make it easy for vandals,” he said.

Cllr Kelly is hopeful that the bridge will be gone one way or another within eight weeks.