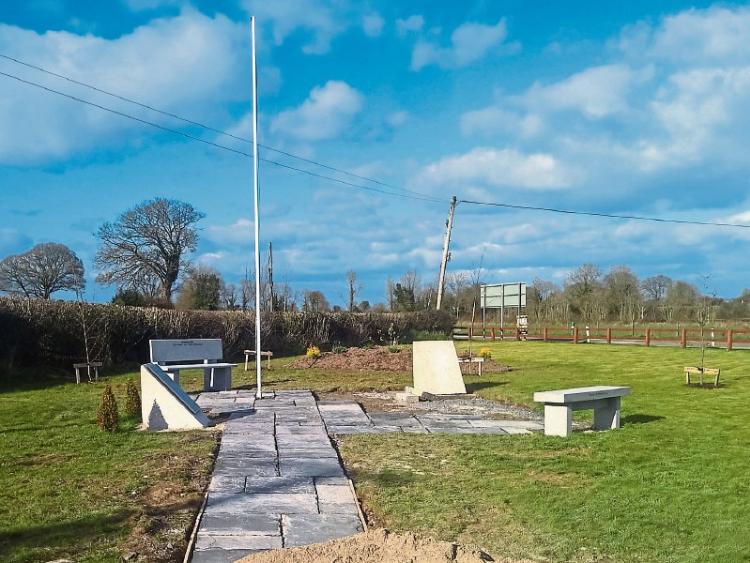 This Saturday, April 23 will see the unveiling of Phase II of the very first 1916 Garden of Remembrance in Ireland and the world.

Phase 1 of the project took place this time last year and was attended by a very large crowd of dignitaries and locals.

The unveiling of phase 2 will take place at Colt Cross, in the heart of Raheen at 7 pm.

The Remembrance Garden is a Government initiative promoted by Seanad Éireann and phase II will be officially opened by Cllr John Joe Fennelly.

The garden consists of seven native Irish trees to represent the seven signatories of the Proclamation, The Tricolour and the Proclamation of the Irish Republic etched on a marble plaque.

This year the organising committee will be focusing on the local volunteers, both men and women who participated in the 1916 Rising and the events leading up to it.

This is a very significant occasion for Raheen and County Laois. It is appropriate that Laois has the first Garden of Remembrance, as it is officially recognised that Laois is the site of the first shots, 5 kilometres from the garden.

This complements the memorial at Clonadadoran which was erected twenty years ago to commemorate the first shots of the Easter Rising.

The Garden is located on the N7 at Colt Cross between Portlaoise and Abbeyleix. The organising Committee are looking forward to a great evening, refreshments available afterwards in Eamon A’ Chnoics, all are welcome.

We would like to thank our sponsors who worked with us, both this and last year: Manor Stone, Ballacolla, T & C Garden Centre, Mountmellick, John Galvin Colt, Dunnes Hardware, Abbeyleix, Shiels Quarries, Shanahoe, Tony Kavanagh Colt and Pat Nagle Memorials Kilorglin, Co. Kerry. We would also like to thank Councillor John Joe Fennelly for his ongoing help and support throughout the whole project.

Raheen Garden of Remembrance is grant aided by Laois County Council under the 1916 commemoration fund.