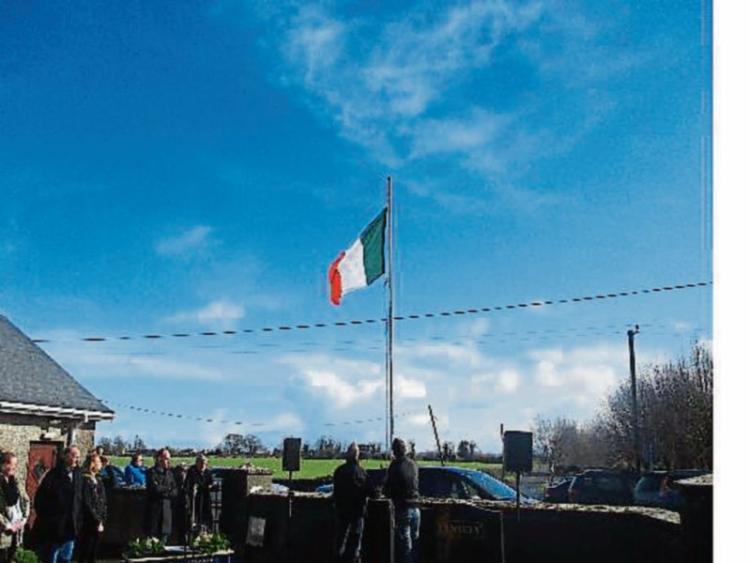 On Sunday, March 27 Barrowhouse Community commemorated the 1916 rising after mass with a wreath laying at the graveside of O'Connor and Lacey who lost their lives in the War of Independence, also there was reading of the proclamation and the raising of the tricolour flag.

Both relations from the O'Connor and Lacey Families were present at the Commemoration which saw a large crowd turn out at Barrowhouse Graveyard.

Early in the afternoon of 16th May, 1921 eight young men from the Barrowhouse area left their homes and walked to a pre-arranged meeting place in the graveyard adjoining Barrowhouse Church. Their mission was death. Their intention was to ambush Black and Tans stationed in Ballylinan who regularly travelled on the road between Maganey and Ballylinan. The local men were all members of B Company Carlow Brigade, Irish Republican Army based in the Barrowhouse area.

On the previous night arms and ammunition had been brought from Castledermot and delivered to Joe Maher of Cullinagh who was leader of the Barrowhouse men. The I.R.A. had an extensive network of informers in all the Police barracks in the area and Ballylinan and Athy were no exception in this regard. A contingent of Black and Tans were expected to pass through Barrowhouse that afternoon on their way from the Ballylinan Police Barracks to Maganey.

Seven of the local men armed for the most part with shotguns laid in wait while one man acted as a lookout. As the Black and Tans approached on bicycles the doors of the nearby school opened and the local children tumbled out into the bright sunlight of that May afternoon. The Black and Tans dismounted from their bicycles and walked past the waiting I.R.A. men surrounded on both sides by the young boys and girls on their way home.

The I.R.A. men realising that their carefully planned ambush was not now possible because of the proximity of the school children immediately changed their positions. Moving across the fields they sought to cut off the Black and Tans further up the road but as they did they lost the element of surprise. Their cover was also lost and contact between the members of the unit could not be maintained in the ever changing circumstances.

The attack when it started was disastrous for the Barrowhouse men. The shotguns were very inaccurate and it is suspected that their ammunition was damp and ineffective. The Black and Tans reacted quickly and replied with deadly accurate fire from their Enfield rifles. Two of the I.R.A. Volunteers, William O'Connor, and Jim Lacey both from Barrowhouse were killed. Their companions were helpless in the face of the superior firepower of the Black and Tans and withdrew from the scene. The survivors of the unsuccessful ambush party were Joe Maher, Cullinagh, Mick Maher, Barrowhouse, Joe Lacey, Barrowhouse, Jack O'Brien, Barrowhouse, Joe Ryan, Kilmoroney and Paddy Dooley, Killabbin, Maganey.

The bodies of O'Connor and Lacy were brought to the R.I.C. Barracks in Ballylinan and were released on the following Tuesday when they were conveyed to St. Mary's Church, Barrowhouse. On Thursday morning at 11.00 o'clock Requiem Office for the dead was chanted and Solemn High Mass celebrated with Rev. J. Nolan C.C., Athy, as celebrant. After the Mass the two coffins were carried on the shoulders of local men to the nearby graveyard. As the two coffins were lowered into the double grave a lone trumpeter sounded the Last Post.

On the night of the ambush, the home of John Lynch, Barrowhouse, one time Captain of the local I.R.A. Coy was burnt by the Black and Tans. Joe Maher of Cullinagh who had led the ambush at Barrowhouse later enlisted in the Irish Free State Army where he became a Military Policeman.

He resigned in 1924 when a number of ex British soldiers were given appointments as N.C.O.'s in the new Army. The last survivor of the Barrowhouse ambush was Jack O'Brien, born on the day of the Gordon Bennett Race in Athy and thereafter known locally as "Gordon Bennett". He joined the Garda Siochana and died two years ago in Kilkenny where he had lived for many years. The lonely spot where O'Connor and Lacy died is today marked by a simple memorial at the side of the roadway.