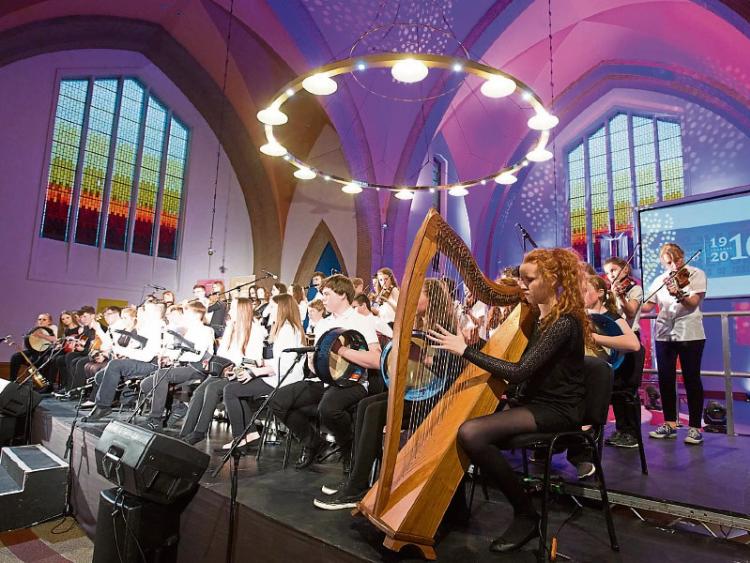 Emotional, respectful, made me feel proud.

These were just some of the comments as the packed congregation dispersed from Portlaoise Parish Church after the 1916 centenary commemoration on Sunday 24th April.

The highlight of the evening was the performance of the Dócas Suite composed for the Laois Comhaltas Folk Orchestra by Áine McGeeney, which had the audience jumping to their feet in a standing ovation as the last note faded.

The tone for this respectful cultural commemoration was set from the approach to the church, where a lone piper mingled with Post 27 UN Veterans, to the illuminated stage in the sanctuary.

Linking the need to cherish all annunciated in the Proclamation, PJ Phelan, Portlaoise Comhaltas Chairman, remarked: “In the 21st century we need volunteers with alms”.

Seven representative charities were given framed copies of the Proclamation to highlight the essential benefit of such voluntary effort -Social Inclusion Network, PATH, Cuisle, St Vincent de Paul, the RISE Foundation, Sue Ryder Foundation and The Parish Centre. On hand to present the copies of the proclamation was grandson of Thomas MacDonagh and relatives of those involved in the railway demolitions in Laois during which it is generally agreed the first shots of the rising were fired. This part of the ceremony concluded with a solemn prayer for the deceased.