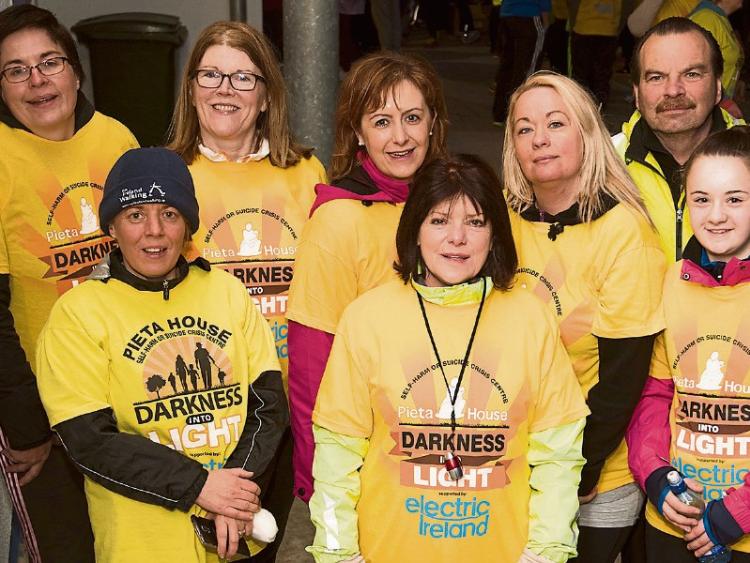 The streets of Mountmellick were filled with yellow t-shirted walkers last Saturday May 7 for the fifth Darkness into Light walk for suicide charity Pieta House.

The atmospheric candlelit event is held at dawn at nearly 120 venues across Ireland and the world, to remember those who died by suicide, and raise money for Pieta House's free counselling service to anyone with suicidal thoughts.

Organisers John and Susan Nelson estimate numbers at 1,800 this year, up nearly a third from last year.

“It is hard to get an exact count as many more children are attending who are not included in the registration figures. It was an amazing morning, the rain held off and a sea of yellow t-shirts took to the streets at 4.15am, heading towards the dawn in fighting the fight against suicide,” said Susan.

Inspirational posters were created by the students of Mountmellick Community School, and a memory tree, memory table and banners were on display for participants to write messages, at Mountmellick GAA grounds.

The ribbon was cut by the new Laois Rose, Kate Hyland.

“I was over the moon at being given the opportunity to do it. It’s such a worthwhile cause and I feel it gives people the courage to speak out when feeling down. Fair play to the organisers in Mountmellick,” she said.

The theme of the walk this year was “gratitude”. Before the walk set off, Susan read a message from Pieta House founder Joan Freeman.

“You have turned a simple, fragile idea into a global movement. This is the day where as a nation we embrace and support one another, and walk in memory of loved ones who have died by suicide and remember them with gratitude for the time they were in our lives,” she said.

An exact figure is still being totted up for the Mountmellick walk.

“Over the previous four walks we raised over €54,000. In the next fortnight we should get a figure as sponsorship is still coming in. The DIL committee would like to again thank all its volunteers, sponsors and participants as without you all this experience would not the success it has been,” Susan said.

This year over 120,000 people took part in 89 walks in Ireland and 17 internationally. Abu Dhabi Rose Dearbhladh Walsh from Portarlington, cut the ribbon for the first DIL in Abu Dhabi.An unofficial Darkness into Light walk took place in Rathdowney for the second year, with donations gathered for Pieta House Roscrea.

Pieta House is celebrating its 10th year this year, with the 10th suicide and self-harm crisis centre to open in Waterford in June.